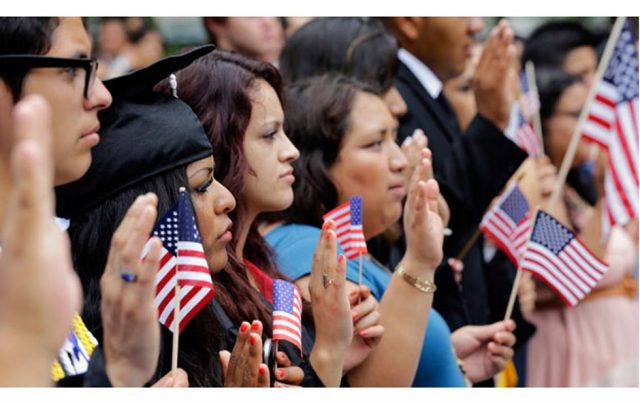 As the President nears an announcement on the Obama era DACA program, political pressure mounts from all sides.  DACA, the “Deferred Action for Childhood Arrivals” program arouses the best humanitarian instincts of Americans.  At the same time, the program itself is bad policy, illegal, and a dangerous executive over-reach.  It’s an abuse of executive power, no matter the intention. The President has a legal and moral obligation to address the issue of children here illegally through no fault of their own, and he must lead on a proper resolution for the tough issues created by their presence.  If tapped to write a speech for the president on DACA & Dreamers, it would sound like this:

Nearly four million children are in America illegally.  The clear majority of them were brought here by their parents when one or more of the parents or a family member broke our laws and illegally entered the United States.  Most of these kids know nothing about American immigration law.  For many, America is the only country they have ever known, and some didn’t even know they were here illegally.

These children have been caught in a political tug of war.  It is the kids who are at the end of that rope.  Neither I nor the American people made this problem.  The two political parties created this problem for their own interests, and they must fix it. Likewise, they must tackle immigration reform as a whole.  A President cannot do that alone.

America is strong enough, brave enough, smart enough, and decent enough not to use children as political props. It’s wrong, and my administration will not be a part of this political dysfunction.

President Obama started DACA.  The purpose for the program was to suspend American law for an entire class of children some call dreamers.  By meeting certain criteria, these children would avoid deportation or action on their illegal status, and thus, effectively, be permitted to stay in this country.

It was an improper presidential amnesty.

Make no mistake, President Obama’s actions were a part of this political game, but also … I believe his actions were a sincere effort to end the drama that our Congress did not and still will not address.  His policy was unconstitutional.  Even he originally said he could not do it himself under the law.  He was right, before he was wrong.  Bowing to political pressure and seeking some solution, he changed his mind and created a program that is essentially executive amnesty.  A Circuit Court of Appeals found it unconstitutional, and a dead-locked Supreme Court left that ruling in place.

As president, I have neither the authority to grant this amnesty, nor should I.  Indeed, no President should be permitted to grant a blanket amnesty to millions of illegal immigrants.  The law does not permit it.

The law does permit this great country to review applications to stay here based upon a host of criteria written into our statutes by Congress and signed by former chief executives.  The only explicit power the President holds in these instances is to control the administrative state and to allocate the resources that our departments need to make and prioritize decisions related to enforcement.  I will do that.

I am announcing today that ICE will be tasked with using all its available and discretionary resources in a priority that first finds, captures, and deports criminal aliens.  It will next use its resources to prevent illegal entry into this country, and with equal importance, it will expedite the review and requests of DACA eligible children to stay.  In doing those reviews, our department will apply the law rigorously, showing favoritism and fidelity only to existing law.

I am ending the DACA program because it is my judgment that I must.

My implicit powers, and the moral authority of the office demand I do more.

I am calling on Congress to end this political game of poker it is playing with the lives of children and the security of the United States.  We need immigration reform, and that must be a legislative package created by Congress.  If it wants to create relief for these kids, write a bill.

That requires Republicans and Democrats to work together. Hate me if you like. Run against me. Villainize me. That’s your right.  But do your job … and I will do mine.

The era of executive inaction on illegal immigration is over.

I have a voice in this reform.  My voice stands for border enforcement.  It cries out for protecting American workers and jobs.  It demands that we keep Americans safe.  It likewise insists that we respect and encourage people to come to this country legally, and that we create a system that expedites the immigration of people who not only want to come to America, but who want to be Americans.

I will say this because no American President ever has.  Immigrating to this country is a privilege.  It is not a right.  Immigration policy should put the interest of existing Americans first, and it should focus on rewarding immigrants who bring great value to our country.

The interest of immigrants to come here is a secondary priority to the interests and value Americans obtain by their arrival.

“Give us your tired, your poor, your huddled masses yearning to breathe free” … and … we will welcome them at the front door.  That is the only acceptable point of entry for welcome guests or future American family members.

Lastly, immigration reform must deal with all those who came here illegally.  It must do so sensibly.  With respect to these children, it must do so compassionately.  Our policy cannot be a blanket reward for illegal behavior, and it must … absolutely must … harshly penalize any who come here illegally in the future.

I will not sign a bill that does not resolve all the issues and reflect these values.

Most importantly, I will not permit the people, including elected officials, locally or nationally, to aid, abet, or encourage illegal activity.  We will deal harshly with those who do, using the power of existing criminal anti-harboring statutes.

It is a felony to encourage illegal aliens to enter or stay in this country.  That is the law, and we will draw no distinction between Mayors, unscrupulous businessmen, and smugglers.

Congress has failed Americans and would-be Americans.  It has failed the innocent children of illegal immigrants. It has created, together with the last 5 US Presidents, the immigration nightmare we now face.

Congress must fix it.

Absent Congressional action, my sole duty as President it to faithfully uphold the laws of this country.  Those laws provide strong means and methods of enforcement, and we will use them aggressively, repeatedly, and unapologetically … until the law is changed by the people’s House and the U.S Senate.

Between 11 and 30 million illegal aliens are in this country, according to various estimates.  Five thousand would be too many.

The era of lawlessness ends today as well.

Congress must address how best to resolve this staggering number.  In the meantime, we will work to prevent more from entering, and at every turn we will work to remove those here improperly.

That’s what the law is, and enforcing it is my duty and mandate.

For those who want to march, protest, riot, cry, or use “dreamers” as props, your energy will be better served getting your representatives to work together on the values and principles I have outlined.  Each day you do not, our enforcement proceedings will continue apace … because that is what Americans have asked me to do until we get a bill that resolves these issues.

I don’t write legislation, but I will enforce the laws we have like they have not been enforced since passed.

I ask Congress to usher in a new era of immigration reform that resolves our issues and puts America and her Americans first.  Start today.