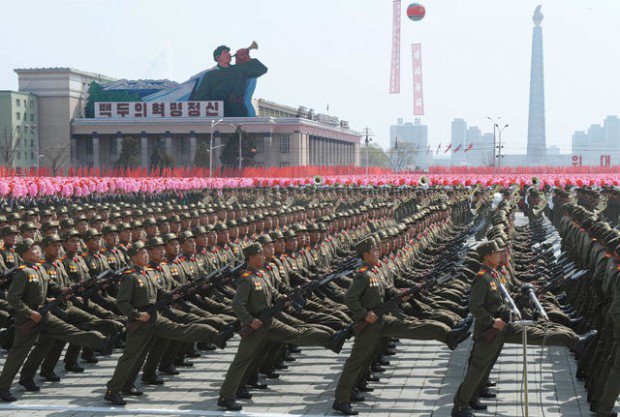 President Trump said on August 8th:  “North Korea best not make any more threats to the United States. They will be met with fire and fury like the world has never seen.”

War should be our last choice.  If fought, a United America must fight to total victory and with overwhelming force.

Today, the US announced that North Korea was able to create and successful load miniature nuclear warheads onto its ICBMs.  Over the last month, North Korea proved it could hit the US mainland as far as Chicago, and maybe even New York and DC with its missiles.  It is a failure of epic proportions that this psychotic, communist country was allowed to get this far.

War is here.  It’s is almost certainly not optional.

The United States and North Korea agreed to an armistice in 1953.  The war never ended.  The parties just agreed to stop fighting.  Since that time, the North Korean regime has been a communist puppet of the Chinese.  It is the bad cousin, allowed to say mean things, provoke Americans, and cause us to expend time, money, and resources on it.  This policy of baby-sitting a despotic, killer regimes, worked until somebody let them get nuclear technology.

Then somebody let them get missile technology.  Now, they can hit us anywhere.

North Korea isn’t Russia, or even China.  North Korea is insanity.  Crazy people run it, and it is the world’s most closed, secretive, and deadly society.  For nearly 25 years, communist Russia, communist China, and Islamofascist Iran have been prodding, feeding, provoking, and poking the North Korean bear.  In so doing, their interest is to create a country that will attack America and land a death blow to the last superpower … a blow that will not be of their making, technically.

When I say the North Koreans are crazy … it’s not hyperbole.  They think strange things, like Kim Jong-Il, the late ruler invented the hamburger.  He also walked at 3 weeks, spoke at 8 weeks, and was a divine birth.  These are some of the less fantastic claims.

When America won the atomic weapons race and put an end to a fanatical, suicidal, religious death cult in Japan, it started the arms race between east and west.  Now, too many countries have the weapons.  A nuclear arsenal sits in Pakistan, a country run and controlled by the fanatics in its intelligence service that support the Taliban.  With North Korean help and US cash and acquiescence, the world’s leading exporter of terrorism, Iran is on its way to nuclear weapons.

It was only a matter of time before nuclear weapons landed in the hands of fanatics, and not just fanatical nations.  In North Korea, these world ending weapons belong to a fanatic who controls a fanatical nation.  Likewise, he has the systems and technology to deliver these weapons to our homes.

Nuclear proliferation must end here … now … this week.  Option two is the certain end of the world in nuclear horror, at a time of North Korea’s choosing.

The single greatest failure of the United Nations, and those self-interested snakes and spies who run it, was failing in a mission to stop nuclear proliferation.

More pointedly, some countries saw nuclear proliferation of this kind as the only way to bring down economic and military competitors.  Think about it, a world run amuck of nuclear nations and factions makes the US easier to compete with and much easier to corner militarily.

Make no mistake, America; this nuclear proliferation was part of Russo-Chinese collaboration to destabilize and bring down the last great super-power.

At an impossible time in history, America faces a horrific, necessary, and devastating task.  It faces it as a divided country with a very imperfect leader.  Trust is low.  Confidence is waning.  I get that.

The nuclear North Korean problem may be the fault of the last 3, 4, or 5 US Presidents and the weak men and women who served in our Congress.  It doesn’t really matter whose fault it is or was.

America must give the North Korean regime a choice.  We must invite it to step back.  Mr. Kim Jon-Un can unconditionally surrender and stand his military forces down … permitting UN peacekeepers to occupy North Korea as the country works to unify with the South.

If it does not do so, we must eliminate it from the planet earth … lock, stock, and barrel.

War on the Korean peninsula will cost tens of millions of lives, if not more.  Repeat that line many, many times.  They will be Korea lives, North and South.  They may be Japanese lives and certainly Chinese lives.  They will include American lives.  The question America must answer, however, is how many lives will be lost if North Korea isn’t stopped this week?  What cities do we lose, and how big are the world-wide losses?

Every single day we permit North Korea to dig deeper, fortify better, increase technology, move missiles to mobile strike capabilities, and to create more and better weapons, we add to the lost lives in a later war by the tens of millions.

I am not kidding.  We can have no compromise.

Earlier this year, I wrote passionately about the effects of the liberal war on Trump.  The North Korean provocation is a direct result of a weakened, unpopular US President.  Like it or not, when one’s party weakens the President, it weakens America.  In this case, Mr. Trump is looking at low approval ratings, attacks from the left and right, and an unceasing war on his administration, policy and character.  Some of this, he richly deserves.  That’s not the point.  The point is, when he is weak, we are weak.

No nation-state pokes a popular US President … because a popular US President controls the world’s greatest military and enjoys the support of his people to use it.  Jong-Un is no rocket scientist.  He’s a loon, raised by a man who was insane and paranoid.  Un thinks he has Mr. Trump right where he wants him now, and his provocations reflect his belief that Trump is weak, and his even more fatal belief that North Korea is strong.  It’s not strong enough right now.

Whatever one thinks of Mr. Trump, he must act.

He must not waver, and he cannot simply act impetuously.  Thankfully, Generals Mattis and Kelly advise him.  I do not fear the military option.  I fear that Trump, Congress, and “we the people” will not rally to the cause and support our country.

We don’t have a plan, nor can we ever have a plan that includes a nuclear North Korea.

If we are to “avert” war now, and Kim stays in power, we will answer for that choice someday.  The cost of that decision might not be merely a #Calexit … it might be world nuclear war.

President Trump Is NOT Under Investigation? The FBI Should Confirm...