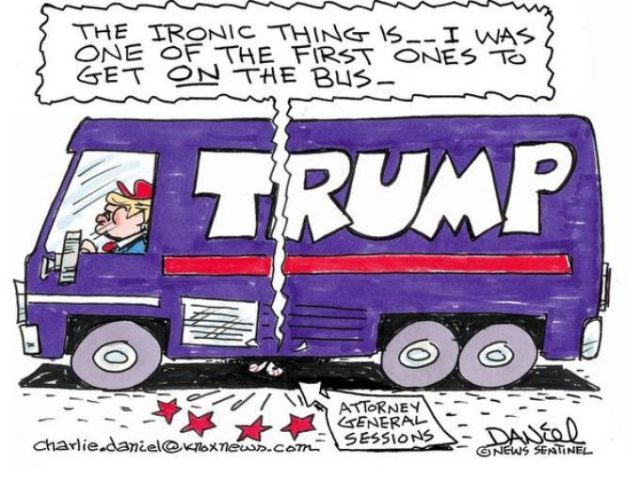 Donald Trump’s followers insist that anyone who dares criticize “The Leader” is an Establishment™ lackey and a disloyal RINO™ (usually misspelled by them as “Rhino”) and declare that they are the real conservatives.

After all, Trump is The One We’ve All Been Waiting For™ who is finally getting in the face of the leftist “news” media and The Establishment. (The fact that his impetuous juvenile conduct is preventing a conservative agenda from actually being passed into law doesn’t matter to them. There’s always a convenient scapegoat to blame.)

Well, let’s see who the truly committed conservatives really are.

No one can dispute that Attorney General Jeff Sessions is a committed died-in-the-wool, real-deal, bona fide conservative. From his days as a U.S. Attorney through his years in the Senate to his six months as Trump’s Attorney General, it would be difficult for anyone to find a single action that he has ever taken or word that he has ever uttered that does not fall under the conservative umbrella. He has been a leader of the conservative movement since decades before Donald Trump discovered two years ago that he’s a Republican when he decided to run for president.

It is also indisputable that Sessions has been one of the most stalwart supporters of Donald Trump since early in his campaign. Sessions was the first, and for many months only, U.S. Senator to endorse Trump, and Sessions campaigned vigorously for him across the country.

When Trump nominated Sessions for Attorney General, conservatives across the fruited plain celebrated, and the left traveled even further into hysterical lunacy. Sessions was vilified by the Democrats and their lapdog “news” media for being dangerously “right-wing.” He was ultimately approved by the Senate on an almost strict party-line vote. (Moderate Democrat Joe Manchin was the only senator to cross party lines).

As Attorney General, Sessions has implemented a consistently conservative line, from stepping up border enforcement and enforcement of immigration laws to ending the Obama harassment of local police departments to endorsing hard-right authoritarian policies such as increased use of civil asset forfeiture and expanded enforcement of anti-marijuana laws (both of which offend the sensibilities of conservative civil libertarians and federalists like me).

Despite Jeff Sessions’ lifelong dedication to the conservative movement and persistent efforts to implement our agenda, and despite his steadfast loyalty to Donald Trump, even when it was politically risky to do so, Trump has now taken to attacking, ridiculing, humiliating, and threatening Sessions.

Why? Well, not for deviating from Trump’s agenda, and not for straying from the conservative cause. Sessions never did either of those things, and Trump knows it.

Trump threw Sessions under the bus for having the audacity to avoid the appearance of a conflict of interest by recusing himself from the Russia investigation.

For that unpardonable sin, Trump has called Sessions “very weak,” “beleaguered” (albeit by Trump himself), and a “terrible mistake.”

He has hinted that he intends to replace Sessions and has leaked the names of potential successors.

He has also engaged in a series of relentless attacks on Sessions for not investigating Hillary Clinton despite the fact that almost immediately after the election Trump stated that he did not want Hillary to be investigated any further:

“I don’t want to hurt the Clintons, I really don’t. She went through a lot and suffered greatly in many different ways.” Asked if he has ruled out prosecuting Clinton, Trump said: “It’s just not something that I feel strongly about. My inclination would be for whatever power I have on the matter is to say let’s go forward.This has been looked at for so long, ad nauseum . . . . I think I will explain it [to my supporters] that we in many ways will save our country.”

And after planting the knife in Sessions’ back, he maliciously twisted it by dishonestly alleging that Sessions was never loyal to him and that his support for Trump was just to get reelected in Alabama.

(Sessions endorsed Trump LONG before Trump had any meaningful following in Alabama, and Trump gained his following there largely due to Sessions’ efforts on his behalf. Trump knows that but never lets facts get in the way of a good smear of his opponents or his allies whenever it suits his fancy.)

So, no, Sessions did not violate our conservative principles. It would be against his nature and core values to do so. And he did not violate his loyalty to Trump. In fact, he followed Trump’s orders to the letter.

Trump stabbed Sessions in the back despite his consistent conservatism and loyalty. He did it for one simple selfish reason: Sessions took an action that he believed was ethically required but that incidentally caused inconvenience to Trump personally.

So, Trump’s back-stabbing of Jeff Sessions now poses an interesting litmus test for all of those Trump followers who defend and promote every single thing Donald Trump ever says and does while claiming to be committed conservatives: Where do you stand now?

Do you stand with the lifelong committed conservative who has spent his entire life advancing our conservative agenda loyally, ethically, honorably, and effectively?

Or do you stand with the president who stabbed that lifelong committed conservative in the back for inconveniencing him personally and for following his own direct orders?

If you choose to stand with Trump, you are certainly a committed Trump follower. But you most definitely are not a committed conservative.

CNN: Sessions Is Racist for Referring to English Origin of American...