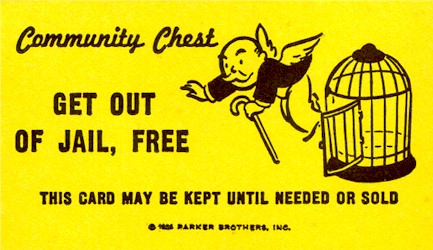 Rumors are swirling that President Trump has his legal team considering various pardons for members of his team and family.  One rumor says Trump is even considering pardoning himself.  My goodness, this Trump team is stupid.  In fact, it’s not a bucket of stupid, it’s a whole 55 gallon drum full of stupid.  It’s our stupid.

Can a president Pardon himself?  Sure … in a banana republic.

Technically, nothing in the United States constitution prevents a President from pardoning himself.  Of course, no one has ever done it.  The legitimacy of the Presidency rests in its legal and moral authority.  Pardon powers reside with the President in order to provide him or her the flexibility to do justice where justice is demanded … for others.

The power to pardon oneself seeming puts one above the law, which I doubt the founders intended.  I don’t know if a President’s pardon of his or her own conduct would stand. Textually, it might. Yet, something seems hinky about it.

Pardon powers are routinely abused and misused. I say that from a moral standpoint, not from a legal standpoint.  Most Presidents issue pardons as political favors to people whose cases and circumstances hardly call out for justice.

The President’s pardon power with respect to third parties is essentially absolute.  However, most Presidents don’t issue pardons until the end of their Presidency.  Why?  Well, pardoning people duly convicted is always controversial.  It’s a legal act on its face, but a pardon is a political act in its soul.  Accordingly, pardons and those who issue them are subject to political backlash … unless the President is done and has no more offices for which to run.  That’s why most pardons, and all controversial pardons usually happen when a Presidency is over.

Ironically, if Trump were to start issuing pardons for his family, aides, and himself, his Presidency would likely be over.  In fact, effectively, his legislative Presidency is already over.  The organized war on Trump by the hard left, together with Trump’s ineptitude, incompetence, and shameful lack of judgement, has reduced him to issuing executive orders and appointing judges. Those are not insignificant matters, but we are just over six months into his presidency, and major, conservative and populist legislative initiatives are dead, even with a republican house and senate.

So, let’s imagine Mr. Trump just starts issuing pardons to already villainized figures such as Manafort and Flynn.  The political backlash will be enormous.  It will further damage the President, and of course, ultimately change control of the House and Senate.  Moreover, it will drive Congress toward impeachment … which is ultimately a political process.

In short, if Trump starts issuing pardons, he destroys what’s left of his Presidency and hastens the turnover of political control to the #altleft.  More importantly, he gives credence to those calling for his impeachment.  In fact, he nearly assures he will be impeached.  That’s ironic.

Now, If President Trump were to issue a pardon for himself, it would set off an immediate, Constitutional challenge.  The political firestorm that would ensue would further rip the fabric of our society, which is already in shreds from political zealotry.   Such a Pardon, and the following legal challenge, would essentially burn the republic to the ground.

The man has been President for six months and one day, and his team is looking at whether he can pardon himself.  Awesome.

Pardon me … but America deserves better than this … or at least some Americans do.

This Trump-a-tation situation … we built that.

Trump is not the disease, he’s the symptom of a crumbling civil society.  Read a few twitter feeds, see how Americans really “think” about each other.  Or, maybe it is, see how Americans really “feel” about each other.  Our society is in a deep, moral and structural decay.  We have an epidemic of fatherlessness, broken families, anger, bitterness, and political zealotry.

Violence is spiraling in our most broken and dysfunctional communities, fed by the religion of racial division.  The death of shame coincided with the rise of reality TV, and we have vomited out a culture that thrives on the failures of others.  .

We enjoy outrageousness for its own sake.

If we want to make America great again … or greater than she has been … we need to make great Americans.  Instead, we made Trump.

On our site, we have found ourselves defending Trump from time to time.  Why?  Well, we are conservatives.  That means we follow principles, analyze issues, and act accordingly.  Trump is not a true conservative, but we don’t oppose him merely for winning or breathing, as some do.

Not everything Trump does, will do, or has done warrants criticism. There is a stark line between pure, ignorant, political hatred for a man, and honest, criticism of a man’s actions and policies.  Moreover, when he gets it right from our conservative view, we intend to say so.  It’s not often, and as I have written, Gorsuch alone is not a sufficient price for the damage he is bringing.

Still … Trump is moving swiftly toward self-destruction, bringing to reality the dream and fantasy of those who colluded to bring him down.

The Trump presidency is on us … in every way.

We nominated two terrible candidates.  Clinton offered Americans a predictable terribleness.  From policy to personality, she was everything America didn’t want.  And while the radical left humps the popular vote disparity, which is real, it NEVER acknowledges that among all candidates, left and right, those from center-right defeated those from center-left.  In short, count them all up yourself, the country still voted center-right in the popular vote.  That’s real news.

Trump won the race of the unwanted, and not because he was wanted or even fit.  He wasn’t her!  That was his main attraction.  Trump also brought with him the benefit, as voters saw it, of being an unpredictable terrible.  Indeed, Trump emerged nationally through the reality TV culture, and believe it or not, the American cult of Kardashian culture warriors want an outrageous President who is outrageous for the purpose of being outrageous.

We got him.  We picked the right guy to crash and burn for ratings.  If only America were a TV show.

The great irony of the Trump situation is that he does everything he can, each and every day, to bring himself down.  The stupid statements, the unplanned, undisciplined outburst.  The tweets, the appointments, the family … you name it.  He’s a petulant 71 year-old billionaire, trust-fund brat who has never answered to anyone.  He isn’t planning on starting now.  He doesn’t even know how.  He’s simply not self-aware.

Now, Trump is thinking about pardoning people … his people and himself.

If we wrote this in a script for House of Cards, it would be rejected as too unbelievable.  But its real, and that’s the misery on which our decaying culture thrives.

For conservatives, in the model of Reagan, all of this is tragic.  It’s sick.  It’s disheartening.  We are undoing the revolution.

From Reagan revolution to Trump devolution … that is the state of the Republican Party, and with it the Republic.

Pardon me America, but Trump is our fault.  And, by our fault, I mean your fault, not mine.

Trump is unpardonable, and we are too for selecting him.

Trump to Arpaio: Thanks for Doing the Job American Politicians Won’t...