I sat down with my rising college freshman and posed this simple question to her:  What should I write about, the CNN “blackmail” issue or the potential resumption of war with North Korea?  Silly gal that she is, she asked me, “which one is more important?”   I briefly explained the relative facts of both issues and she then asked, “So, you have to choose between writing about the more important issue or the hotter, more relevant issue?  No my girl, thanks to you … I am going to write about them both.  Perhaps little explains the media crisis in America better than the issue before, do I choose to write about North Korea or CNN?

North Korea and the United States never signed a peace agreement.  Technically, we are still at war since 1953.  The North Koreans obtained the ability to make nuclear weapons, thanks to them snuckering the United Nations and a weak-kneed President Bill Clinton.  On July 4th, the most closed, dangerous, communist, authoritarian regime on earth fired off its own missile.  Lunatic-fringer, Kim Jong Un, called the ICBM a “gift” to the “American bastards.”

The missile is capable of traveling over 4000 miles, which means the craziest bastard on earth, the guy who hates America most, and really is a murdering psychopath, has the means and ability to hit the US, as well as our allies and bases in the South Pacific.

So, do I write about this possible war that could go nuclear … or do I write about how the corporate cable news giant, CNN, misused its public trust and awesome power to threaten an internet troll who made a funny video about the floundering, discredited network?

Let history record that the day after NK launched 2-stage ICBM capable of delivering nuke to US, social media was obsessing about a GIF

Of course, the North Korean story is much, much bigger. In an honest, smart, responsible, decent America, that would be all we would be writing, talking, or analyzing right now.  That’s just not our America.  We are the Kardashian culture. If it’s hot, its hot … substance or consequence be damned.

To be fair, the issue of what to cover and how to cover has always been at the center of media power and bias

Now, with media sources so diffuse, and the power of a social media where posters command armies and legions of supporters, nearly anyone is a media mogul.  Let’s face it, this piece I write might get 1,000 to 5,000 views.  I’m not exactly running the Old Grey Lady.  But the choice I face is one editors have faced for decades.  In a fragmented market, making the correct choice for many for-profit entities is an easy call.

In 1982, Don Henley famously sang of the “value” of selling dirty laundry.

I make my living off the evening news
Just give me something-something I can use
People love it when you lose,
They love dirty laundry

Well, I coulda been an actor, but I wound up here
I just have to look good, I don’t have to be clear
Come and whisper in my ear
Give us dirty laundry

Right now, CNN’s dirty laundry is left hanging out to dry on the internet.  It’s hot, and the stench of CNN’s credibility collapse is palatable.  #CNNBlackmail has been trending for a day, and twitter is on fire as posters attack the entity  for using its power to seemingly coerce an apology from a meme maker for his Trump CNN WWE slam meme.

Indeed, it seems CNN let the fellow know … hey … we also reserve the right to expose you and ruin your life if you get out of line with us in the future.  CNN morning mouth piece and brother of current and son of former Democrat New York Governor even deleted his threatening tweet.

Why did @ChrisCuomo delete this tweet? Possibly because they found out it was 15 year old kid they are trying to extort. #CNNBlackmail pic.twitter.com/JfLWOI6bo4

Make no mistake, the issues raised by CNN and its team in both hunting down a critic and threatening to expose him are serious.  CNN made itself the story, which breaks rule number one of real journalism.  Moreover, the chilling effect of such threatening action on free speech, is devastating.  Serious writers and thinkers will not let CNN off the hook easily, nor should they. 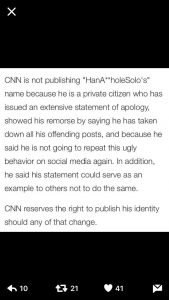 Some have tried to dampen criticism of CNN and its team, including this tweet by an understanding and gracious conservative Hugh Hewitt:

In reality, though, Mr. Hewitt, now a member of the media establishment, throws a life-line to a fellow member … when that member has no such history of being gracious towards the people or subject matter he so covers.  Indeed, Andrew Kaczynski is an unrepentant anti-Trumper.  He uses his twitter feed to grow that army, and he never affords Trump or his supporters the grace Hewitt shows him.  Hunting down an internet troll who made fun of your company may show some investigative journalistic instincts. To be sure, he has them.  Threatening the man with a public outing shows a lack of judgment or even a basic understanding of the power that such a reporter and network yields.

Doing all that after ripping another for the same … well … that’s really troubling. 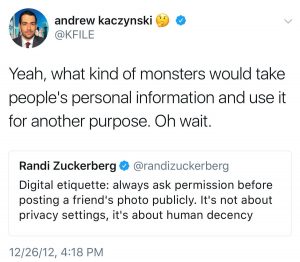 So, when I write on the subject, and I analyze which to choose, I have two great topics.  One is about life, death, and world war.  The other is about free speech, abuses of power, and dirty laundry.  The latter is not frivolous, but it’s not life or death … yet.

The choice I face, however, is what every outlet faces.  Do I want clicks?  Do I want shares, re-tweets, more followers, and … more clicks.  In fact, we live in a world where unless you are the Washington Post, or CNN, most of your readers don’t launch from your own site.  They launch from social media to your site.  If you run a for profit site, the choice of topics is economic, not moral or journalistic.  Do you want more clicks … or do you want to talk about the big issues.   Moreover, as I discussed above, the market for followers and consumers is deeply fragmented … which is why it is even harder than ever to pass on click-worthy or even click-bait stories.

It is easy for me to take the high road … my site has no advertisers.  We quite literally don’t get paid for our work, and thus clicks have no immediate pecuniary value for us.  That’s true, though like most new sites, we hope to draw traffic, and clicks build strength should we move to a profit driven model … which as good conservatives would ultimately be our goal.

In fact, one might argue that on our site, where we get 500-130,000 hits on our pieces, we would do better to hump the hot topics over the important topics.  Let’s face it, I need more 10,000 views pieces if I want to monetize our content.

However, as I said when we launched this site … we will continue to cover issues as we see fit and based upon their importance.  And guess what … we will not fall into the trap of plain clickbait.  Likewise, as we have done with long pieces on the Emoluments clause, Seth Rich, law school reform, Liberty, and dozens others, we break the blogging rules by writing long, strong, difficult pieces that essentially flip off the trends and SEOs.

Most outlets, however, are not willing to give up those clicks.  They are not willing to write 5000, 7000, or even 1000 word pieces.  I can write at a 7th grade level, and I know how to make the SEO filter on our site give me green lights to indicate I am tapping into the average American.

I love the average American.  I should.  I’m him.  However, I aspire to give all Americans more substance … that’s why we cover issues as we think they should be covered, and not based upon which we think will drive clicks to our site.

CNN has lots of problems, and I was one of the first to identify and analyze them.  I suspect I will write on it again, and maybe even this issue.

In short, can America risk a nuclear Korea with both fixed and mobile ICBM technology?

If America is headed to war, what is the objective?  What are the risks?  How many will die.  Does America even have a sensible war doctrine?

North Korea presents a watershed moment in humanity.  America confronts a maniac with nuclear weapons, a disdain for the standards of the community of nations, and the means, method, and motive to deliver his power to kill millions.

Can we do nothing?  Must we do something, knowing it could lead to all-out war?

Whether one is a blogger of little following, a major network, or just an American consumer of information, there is only one topic that merits your attention on the world stage, and that topic is the potential for world war with a nuclear power.

The dirty laundry can wait.

America has a media crisis.  It’s not based upon what I write and print at the CommitttedConservative. I wish it were.  It is based upon the inability of purported journalists and the world leaders they cover to discuss, analyze, and inform the public on serious issues … free from purely profit motive or political agenda.  Of course, media outlets are following the market … and the American market is mass consumers of garbage.

Until North Korea is out “trending” #CNNBlackmail on Twitter, I promise you we have done nothing to address the media crisis or the looming humanitarian catastrophe of world war.

The real irony of all this is, last night I flipped on the major cable networks to see what they were covering.  It was CNN, with a guest anchor, giving significant, thoughtful, and substantive coverage of North Korea.  It collected an outstanding panel of real policy experts and former diplomats who detailed all of the issues and options.  Of course, CNN had no interest in covering the story about itself.

So last night, maybe thanks to #CNNblackmail, CNN was real, substantive CNN.  I thought to myself …. This is CNN … or at least for a night … it was the CNN I remembered.