It’s hard being an American conservative right now.  If you think angry, misguided, bitter, mean-spirited, #altleft radicals, rubes, and rioters are unhappy about Trump, try being an actual, real, decent, Constitutional Conservative who loves his country. Trump is crazy.

Donald Trump was never fit to be President … not once ever.  Trump got elected because real Americans are terrified of the left and Hillary Clinton.  Americans reasoned that Trump’s antics were bad, but socialism, crony capitalism, and corrupt, politically correct policies were worse.

Many Conservative came home and voted Trump on the promise of a Conservative Supreme Court and the hope that the Presidency and sound advisors would normalize Trump.  That hope is dead.

To be clear … Gorsuch is not enough.

The President of the United States is a nut job, to use his own phrase.  He’s stone-cold crazy.  As I rightly analyzed from the very beginning, it has always been about him.  The Republicans, America, all of it … we mean nothing to him.  He is about Trump, Trump’s ego, and Trump’s insecurities.

Some may read this piece and say … look … another never-Trumper attacking Trump.  Others who have read my work, might say look, he’s finally getting off the Trump train.  I was never on it.  Indeed, as I have explained repeatedly, I am an American conservative.  I am for conservative principles, and as those who have actually read my work know, I defend the President when he is right or when he is unfairly attacked.  Likewise, I go get him when he is wrong.

I understand the Trump cult of personality.  Hell, I wrote on it first in The Trump Phenomenon.  I just never bought into myself.  Likewise, however, while I opposed Trump, I refused to attack him on policy as a knee jerk reaction.  Indeed, many attacks on him are clearly false and wrong.  I think the phony War on Trump, based on the emoluments clause ruse, or the obviously absurd Russian collusion narrative  are nothing more than a deep-state, hard-left, effort at a soft coup.

Trump can be completely innocent of these allegations and still be crazy.

Trump’s insane, immature, and infantile conduct is destroying the purpose of his election.

That purpose was purportedly to drain the swamp, move back to free markets, protect American interests and to stop job killing regulation and family crippling taxation.  Nothing is moving in his agenda because he is a freak show.  He’s that roll-over accident that brings the interstate highway of governance to a complete stand-still.

The man is the President of the United States of America … and with our borders unsecure, ISIS on the march, Healthcare imploding, no tax relief in sight, thousands of federal and hundreds of judicial appointments to make … he is tweeting crap like this: 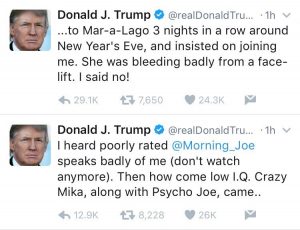 As I tweeted a few days ago … about something else idiotic Trump tweeted … .

Of course … this sounds like a joke.  I’m not kidding, and neither is America.

Half of the country hates Trump.  They hate him for winning.  They hate him for being rich.  They hate republicans, they really hate conservatives.  They despise capitalism, free speech, property rights, and the American Constitution.  If Trump were the model of decorum and decency, he wouldn’t win a single one of these people.

Trump seems insistent on losing the people who should at least tacitly support him.

That’s where we are today.  The primary appeal of the President of the United States … to his primary supporters … is that Trump really pisses off the people his supporters hate most.  We’re an angry, backward, banana republic.  Not all of that is Trump’s fault, of course.  We get the government we deserve.

How does President Donald J. Trump make us a better, more civil, more decent, more responsible society?  How?  Someone write a piece titled, “How Trump Makes the Civil and Decent Society Better.”  I double-dog dare you.  One old friend and former Republican Congressman tweeted in complete frustration today his reminder about Trump and the Trump conduct.

Nor can one have a PotUS without US.  We bear the blame for this.

Whether one is picking a law school dean, a US President, a waiter, or a fast food manager … character, civility, and decency count.  A self-serving, crude, narcissistic, ego-manic  who is really an insecure man with the trappings of power doesn’t wake up at 71 and become someone else.  That was the fatal flaw in the false hope that GOP voters had when they begrudging, with no recourse, pulled the trigger for Trump.

Trump is both old and a dog … and thus expecting that old dog to learn the tricks of decency was just silly.

Trump is going to take Trump down.  That is certain.

Trump is almost certainly going to take down the Republican party too.  Ironically, when he does that, he takes down America with him … leaving our broken culture to those who drove American values off the cliff.  Yes … republicans voted for that.

I remember casting my first vote for “morning in America.”  It was 1984, and Americans were living at the confluence of optimism and conservatism … which I now call Reaganism.   That America is dead, and those of us trying to revive her are down to the electric paddles.  Time is running out.

Trump is going to bring down the Presidency.  With it, he will bring down the one major party that nearly … sometimes … stands for American principles.  When that is done, the left will bring down our country.  Because of Trump, the poltical tide will turn, as it always does in reaction to failure.  The left will seize power, and I promise you, not without an actual fight will Americans get it back.

Mr. Trump is crazy, and getting Gorsuch … great as he is … is not enough in payment for the damage Trump is doing.

Mr. Trump is going to have to step down, or the Republicans will have to remove him.  If they don’t, that party and our country are headed toward certain collapse.  We will be left in the hands of the #altleft and their horrifying vision of anti-Americanism.

While the left burns our flag, it is Trump burning our country to the ground.

Sound crazy? It’s not as crazy as Trump.

(There goes the Federal Judgeship … under President Trump)