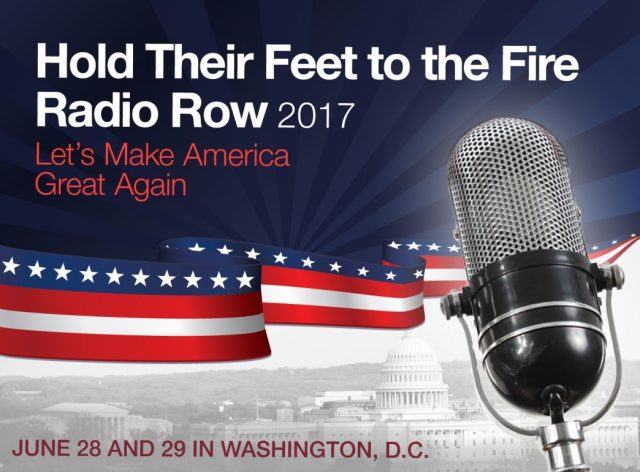 A growing and influential collection of real immigration reformers are meeting in Washington for the 11th Annual “Hold their Feet to the Fire” event, hosted by the Federation for American Immigration Reform (FAIR).   Not surprisingly, the event is receiving very little mainstream media coverage because these Americans seek reform that prioritizes America first.

The Event, held over two days, focuses this year on:

The “Hold Their Feet to the Fire” event represents the type of active, ongoing, political movement that takes place in the shadows because that is exactly where MSM outlets want to keep real grass-roots movements.  If this were an annual march for immigration justice, or for amnesty, or for immigration rights, you would see and hear about it in the Dinosaur Media and Press.

The declining power of the MSM and the distrust Americans have for it comes from what Americans now easily identify as slanted and selective coverage.  That leaves most Americans searching for and finding alternative news and information outlets.  Make no mistake, sometimes that search results in an echo chamber, and sometimes it leads consumers of news to unreliable, if not fake sources.  However, the crisis of credibility in our media begins with the biggest media names, as I have catalogued repeatedly.

I have been writing on this topic for more than 26 years, before some immigration reformers even knew reform was needed. Indeed, the issue of mass illegal immigration came home to me, thousands of miles from our southern border.

Many pundits, reformers, and politicians talk about immigration reform, and they often do it from the perspective of illegal immigrants.  They forget that immigration is for the benefit of Americans first, and not to benefit the needs and desires of would-be immigrants.  Such an immigrant centric policy would be foolish, as would a policy that would stop all smart, thoughtful, necessary legal immigration.

The focus on walls has obscured the greater reform issues, which require that we eliminate the incentives to come here illegally. Now, we have some national attention the sanctuary cities, a problem that exists because we ignored illegal aliens.  Make no mistake, innumerable tools are at the disposal of a willing government to address both sanctuary cities and the illegal and improper incentives they create.

For Americans, of every political stripe, immigration reform is essential to the health of our country and economy.  It is critical for our safety, and it is a vital to our common culture to ensure both our growth and necessary acculturation.

FAIR is on the front lines of this effort, and it has been for a very long time.  The event it hosts now each year continues to grow. The influence of that event depends on Americans like you and me, spreading the word, supporting the movement, and looking to build responsible, yet urge responses and policies to address all our immigration issues.