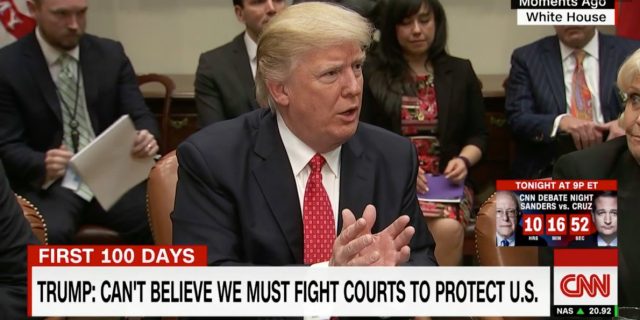 The internet stinks.  Reading tweets this morning, one might think the Supreme Court unanimously re-instated the Trump Travel Ban.  Not only did the High Court do no such thing, any thoughtful reading of the order, concurrence, and dissent, would give great pause to celebrating Trump acolytes.  Here is a quick summary of the Scotus ruling today and what it likely means for the Travel Ban and presidential power.

If you read nothing else, or if you have no legal training, one might see how political animals, partisans, and those with rooting interests in a cult of personality might think this was a Trump win.  Here is some analysis of the Court’s actions.  This analysis explains the significance, if any, of the specifics of the holding.

Multiple federal courts, including two Circuit Courts of appeals have reached this travel ban issue.  As such, the High Court taking this case isn’t extraordinary.  Indeed, because the case will either affirm or re-shape executive power, and because these injunctions were national injunctions by federal district court judges, it was timely and proper for the High Court to hear this matter and consolidate the cases.

Where some Trump supporters and purported conservatives have gone off the reservation is on the next three actions identified above that the High Court took in its order.  First, it is 100% true that the High Court struck down portions of injunctions issued by partisan District Court Judges way out of their depth.  However, while those portions struck down were important, they were not nearly on point with the hope and aspiration of either Executive Order.

In short, Trump won only the easy layup he had to make on that part of the Order.

The High Court struck down the injunction to the extent it applies to foreigners with no tie to the United States.  That was not only predictable, but essential.  That injunction and the legal basis for it was a new level of judicial tyranny and incompetence.   The idea that any foreigner without any connection to this country has standing or a right to travel here is neither controversial nor complicated.  The High Court win on that issue was great, but it hardly vindicates the President of either of his Executive Orders.

The Court upheld the injunction to the extent it applied to certain classes of foreigners.  In its Order, the Supreme Court allowed lower court injunctions to stand with respect to foreigners who had family ties in the United States, or who had ties to certain institutions or companies.  For example, foreigners accepted into a college, those with job offers, or those with close family ties in the US can still travel here irrespective of the executive orders.

In short, the injunction curtails and limits the President’s power under the very statute he used to defend his action. The High Court guts his E.O. and tips its hand that it will further limit his power under 1182(f).

Moreover, these classes of prospective plaintiff’s represent a group of foreigners to whom the US High Court thinks might deserve standing in an action to protest a presidential order on national security.  How the hell anyone thinks that is a win for Mr. Trump, executive authority, the essential statute at issue, or national security, I have no idea.

In fact, it’s an outright loss that signals a likely further loss in the October hearing on the merits.

Finally, many celebrating Trump fans completely missed the most important part of the Court ruling.  I noted the “dissent” in my tweet today, which some lost buried in the “concurrence.”   That dissent notes three judges would have done something more, different, and correct.

Perhaps the confusion of writing a “concurrence” confused the casual reader.  It did not confuse me. It was a concurrence and a dissent, and it was a dissent by only three conservative Justices.   As I like to say, don’t just read the headlines and the headers.

Justices Alito, Thomas, and Gorsuch, all noted that they would have struck the injunctions completely, thus letting the President’s E.O. stand until the High Court ruled on the merits.  In short, 6 Justices have tipped their hand that the E.O goes too far, and only three have essentially said the E.O. is Constitutional as written.

How this becomes a win for Trump, I know not.

Based on the ruling today, 6 Justices, including two purported conservatives, thought foreigners of certain types had such strong claims that they would likely win on the merits, and therefore the Court protected them by keeping the lower court injunctions in place.

In my view, as I have written before, 1182(f) gives the President the authority he needs to stop travel for a national security matter, and an E.O. that is Constitutional on its face cannot be challenged.  Today, the High Court said otherwise.  That is not a win for Trump, national security, textualism, legal precedent, or any Constitutional Conservative.