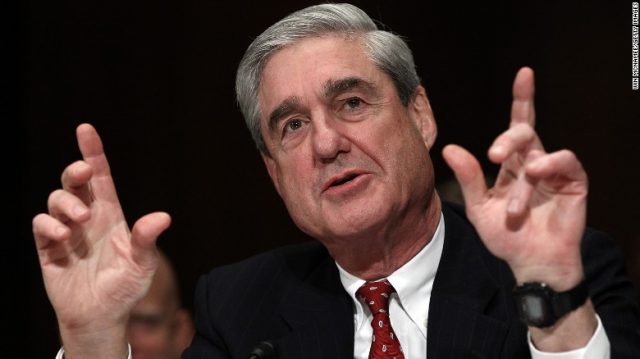 Trump is making me crazy.  He may in fact be crazy.  What he is not, however, is a Russian agent.  Nor has he or his campaign conspired with Russians to “hack” our election.  Roughly 11 people in this country actually believe that silly allegation.  We call them idiots.  The rest of the people pushing this narrative are just angry, partisan zealots, internet profiteers, or left-wing media types.  The entire “Russia/Trump” narrative is a political fairy-tail and an organized left-wing coup.  There is not one scintilla of evidence of Trump or his campaign colluding with the Russians to steal the election. Bob Mueller is now head witch in the political witch hunt, driven by partisans in the deep state.  Trump should fire Bob Mueller, and he should fire every Comey associate in the FBI … as soon as possible.

Sure, firing Mueller will pour political gasoline on a raging wild-fire.  The media will go crazy, the left will go mad … or is it madder?  Partisan hackery will ratchet up, and allegations will fly that Trump fired all these people because they were just about to prove he was guilty.  Riiiiiighhhht.  That’s the ticket.

The Washington Post ran a “story” a few days ago, quoting their favorite source, Mr. Anonymous, an either fake source or future federal felon engaged in government leaking. The source(s) suggested that Mueller is investigating Trump for obstruction of justice.  If he is, Mueller is nakedly incompetent.

Mueller, as I indicated in a recent interview on DC’s WMAL Larry O’Connor show, ought not be involved in any way with an investigation that involves Mr. Comey as a witness, interested party, or likely target.  Mueller and Comey have been filling this swamp up together for decades, and Mueller’s involvement with his friend Comey is not merely giving the appearance of impropriety … it is impropriety.

Moreover, The President interviewed Mueller for the top job at FBI.  That interview and conversation disqualify Mueller as it makes him biased and a possible fact witness.  He can’t now pretend to be the “independent counsel” and “Chief investigator,” of the President, with whom he interviewed and likely discussed all these matters.

Like an infomercial … that’s not all … Mueller, who many have lauded as the paragon of virtue, is now running an investigation with what some media outlets have called an all-star panel of investigators.  Maybe, but as the Bezos, anti-Trump, Washington Post proved, Mueller’s team are a group of leaking federal felons in waiting.  The man-in-charge either isn’t in charge, or his team is deliberately leaking information to damage a President with Mueller’s approval.  Either way, Mueller is responsible for that.

Mueller’s dream team of investigators are swamp creatures, the vast majority of whom have deep state and deep blue, political ties to the party whose operatives are running this not so covert coup against our nutty President. No credible lawyer would step into the role Mueller assumes given the facts and connections Mueller has to the case and witnesses.

Seinfield was a highly successful, multi-year TV series about nothing.  The Trump/Russia investigation will be a highly successful, multi-year investigation, about nothing real.  It’s a ruse.  It’s about destabilizing the country, destroying a President, and stopping a political agenda.  Mostly, it’s about protecting the establishment and the deep state.  It is a war on trump from the neo-con right to the party insiders of both parties who use Washington as a tool of power and profit for a narrow, elite, ruling class.

Trump might be the least fit man ever to hold the highest office, but at least he completely understands the detestable reality that the establishment views Americans as rubes to use in a power struggle with each other among the ruling class.  Just because someone is nuts, or ignorant, doesn’t make them always wrong.

Firing Mueller may be the last nail in the Trump political coffin.  If he asked me, I would counsel the President to give a prime-time speech that sets out all of the ridiculousness, and then call on Mueller to resign, immediately.  Failing his resignation, I would fire him.

The establishment is going to take Trump down no matter what he does, so why not do what he claimed he would, which is drain this swamp?  More than half the voting country didn’t want Trump. The entire media establishment wants him crushed and removed.

Most GOP voters voted for him merely to avoid Hillary, and every political insider feeding of the system needs him to be stopped.  The deep state, federal bureaucrats will do ANYTHING to help sabotage him and drive him from DC to protect their interests and the system on which they too feed.

Trump stands alone, and he is doing a terrible job at an impossible mission.

The empire is striking back, and it is being followed by countless drones in a war on Trump that can only end with Trump’s head on a stick or the empire and its sycophants defeated.  For Trump to play by the deep state’s rules and permit an improper, corrupt, unjust, and politically motivated investigation to continue to stop his effort to unwind DC’s elite culture and drain its swamp makes no sense.

Trump promised to change our corrupt DC culture.  Ironically, while the narrative has been that he’s dumb, lying, and won’t do it … the DC elites were never going to risk that.  They took him dead serious, which is why they launched this attack on him less than 24 hours after his improbable win.

For weeks, we saw protests, riots, and disruption.  We saw phony, left-wing, faux lawyers like Larry Tribe sell-out their reputation and legal franchise to create bogus attacks like the #EmolumentsClause ruse.  We saw an uprising in Federal agencies, and we saw mass protests on our streets organized before Trump was even sworn in. And, in the background, we saw this organized, phony, Russian/Trump conspiracy hatched by Hillary Clinton’s losing team.

Mr. Trump … it’s time to man up and put down the coup.  Mr. Mueller is the living embodiment of an elite, DC insider.  He’s here to end your presidency under false pretenses, with fake evidence, and through a leak driven illegal investigation.  Fire him.