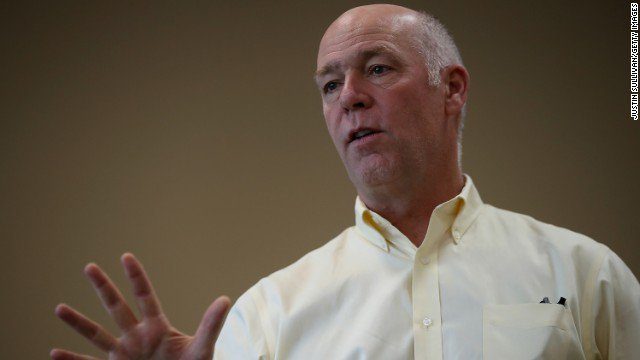 In a decent America … the only votes he receives today are from hard-working Montanans who haven’t heard about his assault of a reporter.   While there are a great many hard-working Americans in that state, few would likely have not heard about this issue.  As such, Gianforte shouldn’t pull in more than a few votes actually cast today.  Ironically, that would make America great again.

The hyperventilating over this issue is tragic.  Make no mistake, I am a rock solid conservative.  Possibly handing a Congressional seat to a democrat in a state where one should not win gives me no joy.  In the end, however, we must elect decent people to office, and we must consider the judgment, temperament, and actions of every candidate, particularly under pressure.  That is why I never supported Mr. Trump.

Last night, when the story first broke that a reporter was purportedly slammed to the ground by a Congressional candidate on the eve of a special election with national attention, I was immediately skeptical.  Healthy skepticism is critical in a world where fake news flies fastest, and many reporters and journalists are partisans with an agenda.

I did not, and indeed would not jump on the band wagon when the reporter first tweeted about the incident.  I need to here more, and everyone should have had that same need and skepticism. Then came the release of the entire audio of the event.   I listened to the audio 11 times.  In fact, as twitter blew up, insisting that the audio was damning proof against Gianforte, I still held back judgment.

To my ear, it was clear that there was a tussle, and that Gianforte seemed to snap, for no obvious reason.  That was certainly proof of a fight, but it was not proof by itself of an unprovoked fight.  It seemed to me that something unseen had to have happened. Did the reporter grab him?  Did the reporter stick the mic in his face and maybe hit him in the mouth or nose … which might cause a visceral reaction?  Something seemed amiss, because why would any candidate just flip out and assault a reporter without a precipitating physical event?

Then came the next piece of evidence.  It was a hastily arraigned campaign statement setting out a purported course of events, including a statement that the campaign claims it made to the reporter.  That audio is a complete odds with this carefully and foolishly crafted statement.  The audio, with a false statement raised the first real red flag.

Next, of course, came the news that this reporter had done a bruising political piece on the candidate, alleging the candidate broke sanctions on … wait for it … Russia … to do business.   Now the pieces begin to fit as to why Gianforte was ready to rumble.

Still, the event happened before a series of individuals, including a fox TV crew, and those witness accounts had not come out.  When they did, it was clear that Mr. Gianforte snapped, looking for a reason and excuse to blow up at this reporter.

Only at that time, did I rightfully reach the conclusion that Gianforte was in the wrong.  It’s called getting the evidence, and it is a step over which we can’t ever leap.  Before the evidence came out in full, or partisans on both side knew what happened.  Facts didn’t matter.

If you hate Trump, hate the GOP, and are part of either the anti-Trump movement on the neocon right, or the anti-American resistance on the left, you not only had Gianforte as the bad guy immediately, but you were probably tweeting about how it was all Trump’s fault.  Thousands were, seriously, angrily, or even in jest.

I told you guys once Trump was the leader of the Republicans that others would take his lead. #Gianforte pic.twitter.com/uoO1cJmnU6

If you hate the democrats, despise the resistance, and have contempt for neocons and the liberal media, you immediately excused Gianforte’s conduct and either called it justified or acceptable.  Shame on you.

Shame on all of us.

Mr. Gianforte is responsible for his conduct, and the voters should hold him to account, no matter his party.  Let’s put country above party and civility above idiocy … in this one discreet election.  It’s a must needed start.

If Montana send Gianforte to Congress … those voters will be responsible for continuing the cycle of indecency and partisan zealotry that elevates party over country.

In the mid 1980’s, Dan Seals and Maria Osmond teamed up for a big hit, a soothing, thoughtful, catchy love song that walked the line between soft-rock and country.  Meet me in Montana.  It’s a great listen.

I’ve had all that this life can handle … hey America … why don’t you meet me in Montana.  Let’s make a vote for decency, civility, and a change of our culture.

You can vote for anyone you want … literally … in the special election today.  No one should want to vote for a man who doesn’t have the judgment, temperament, or decency to be a public face for and servant to America.