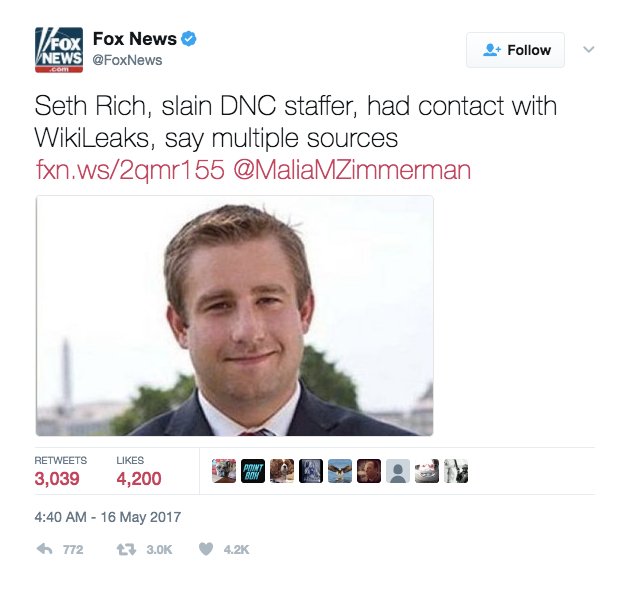 Fox News has so many problems.  Right now, the biggest problem they have is that they have lost credibility with the only audience that thought them credible.  The loss of Roger Ailes hurt.  Losing O’Reilly Hurt.  Having an unpopular President for whom they often cheer-lead, that hurts too.  Nothing, however, hurts a news brand more than losing its credibility.  Sean Hannity and the Seth Rich story have devastated FOX NEWS.  The solution to its credibility problem lies directly with FOX NEWS.

The Seth Rich story is a story.  It’s a sordid, crazy story that I personally have written about and updated nearly daily.  The story was a real story before FOX NEWS stepped in it, and it will be a real story no matter what FOX NEWS does next.  But make no mistake; after the local FOX 5 DC affiliate ran its story on Rod Wheeler, FOX NEWS gave the conspiracy angle a nuclear charge when it dropped its story that same evening.

Here is the rub.  FOX NEWS used a completely different source to tell this broad conspiracy theory.  Moreover, FOX NEWS hit the world with much more explosive allegations, linking the FBI, Wikileaks, the DNC Hack, and Seth Rich together.  To tell this story, they didn’t merely boot-strap on the local affiliate.

They had a source … so they said.

This source was not Mr. Wheeler.  The FOX NEWS source, so they said, was a “Federal Investigator” who wished to remain anonymous.  The source, it reported, had first-hand knowledge of the link between Seth Rich and Wikileaks.

For any sensible, intelligent, honest person, there could not have been a bigger story than this purported link … if it were true.

Anyone with the basic knowledge of this case knows that if Seth Rich did, in fact, leak and send all the DNC e-mails to WikiLeaks, it will be the greatest political scandal in American history … a scandal that would unwind the Russian narrative, and possibly link a murder to the highest levels of one political party.

No human on earth could ever believe that if Seth Rich were the source of the Wikileaks, that his death could ever have been an accident linked to street crime.  If that FOX NEWS source was real, and right, the FOX NEWS Report would be a country changing scandal.  “If” is a big word.

As we now know, FOX NEWS retracted its story.  Since that retraction, and Rod Wheeler’s backtracking, the MSM, liberal journalists, and even conservatives have not merely pushed back at FOX NEWS, they are out to kill it.  They want Hannity and the story dead.  They want to destroy and paint as crazy anyone who even asks any questions, even intelligent questions about a high profile, unsolved murder.  Trust me; I have been besieged by double-digit IQ carriers who confuse questions, facts, and analysis, with pushing conspiracies.

I woke up today and focused almost entirely on the retraction stories. The biggest issue for me was finding out why FOX NEWS retracted.  I know why the local affiliate retracted its story.  Its source was an on camera interview who back-tracked.  Wheeler, as I opined he might be, was a crazy person or a grand-stander.  But, what made FOX NEWS backtrack in its anonymous source story?   What about the so called, “Federal Investigator?”

We have nothing that says this source recanted or back-tracked.

We have FOX NEWS telling us that prior to putting the story on the air the story was not subjected to its normal high standards of scrutiny.  No kidding?

This leads me to one very serious question.  If this country-changing story was so huge … how the heck could FOX NEWS bet its whole name, reputation, and brand on a story without first checking it out?  If FOX NEWS is going to link a so-called investigator to the biggest possible scandal in American history, ought it not have corroborated the story?

When FOX NEWS retracted its story, it did so after other news outlets ran with a story that included an FBI statement repudiating what the FOX NEWS unnamed source had told FOX NEWS.  An official repudiation is not fact, but it is WAY better than an unnamed, anonymous source.  How does FOX NEWS blow this?

There are easy answers for FOX NEWS blowing this story, and none of them are good.  The first is, they never vetted, corroborated, or attempted to validate the alleged unnamed source.  That’s bad.   The second is the unnamed source lied to them, and they never tried to validate the veracity because they wanted the story to be true.  That’s even worse.  Third, they made the source up … which is insanely bad.

FOX NEWS doesn’t say a damn word about this so-called source in its retraction, and you know what, neither does virtually any of the media piling on FOX NEWS.  Isn’t that odd?  It’s like the unnamed source never was part of the story.  The media just simply agree FOX NEWS put out a bogus story, and the other guy in the other story back-tracked, so, it’s all a big lie.  It damn sure looks like a big lie.

But … who the hell is this so-called source, and what happened to him?

Here is how FOX NEWS can save itself and maybe even American Journalism.

I have had it with anonymous sources.  Let’s face it, they play a legitimate role in journalism … when they are validated, corroborated, and found to be truthful. Whistleblowers, leakers, and other sources of solid information are essential to rooting out corruption and incompetence.  That system, however, only works if the information is real, strong, corroborated, and not solely used or leaked for political purposes.

Every media outlet in this country should protect their legitimate news sources, particularly government whistle-blowers.  I have personally been the source of breaking news, and I have personally received inside information for use in pieces.  I would go to my grave to protect real sources with real, strong, truthful, verifiable information.  FOX NEWS should do the same.

HOWEVER … If a source has lied to you, and it has spread knowingly false information … no media outlet or reporter has any duty or obligation to protect that source.  In fact, quite the contrary, the reporter or outlet has an obligation to expose the false source and the lies.

FOXNEWS must release the name and details of its purported unnamed source in the Seth Rich story.

By doing so, it warns all false news creators that if you leak or spread verifiably false information, you will not enjoy source protection.  Doing so will in no way chill or harm real sources, because it is only the frauds who will and should be exposed.

The only reasons FOX NEWS would not expose the liar is if it is complicit in the lie, the liar doesn’t exist, or the source’s information might still be verifiable and trustworthy based on other information, but for other reasons, the source’s info can’t be released at this time. If that were the case, FOX NEWS never would have recanted.

In short, FOX NEWS either knows it source was lying, or it had no source.  Those would be the only reasons to protect a source that literally burned the FOX NEWS division to the ground.

Responsible journalists and opinion makers shouldn’t merely be kicking FOX NEWS while it is down … they should be demanding the source of the false information.  Of course, to do that, they would have to swear off using leakers and politically motivated sources who are themselves suspect and bias.  It is easier for many to simply blast FOX NEWS and ignore the curious, unnamed source that seems to have simply vanished.

FOX NEWS is sinking like a stone … and it has one real option before it drowns.  It must come clean about this source, even if it means exposing its own crappy reliance on a liar.

I report … you decide.