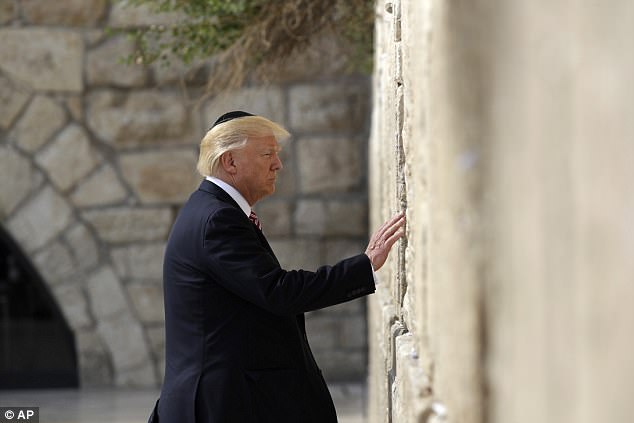 In doing so, he demonstrated like no president before him his understanding of and commitment to Israel and Jews across the world.

The Western Wall is the holiest site in all of Judaism. It is a remnant of the outer protective wall that surrounded the Second Temple, which was the the center of all of Judaism in biblical times.

The Second Temple was destroyed in 70 C.E., when most of the Jews in Israel were kicked out of our homeland into the diaspora by the Romans. We remained spread throughout the world without a homeland until the reestablishment of Israel as a Jewish state in 1948.

During those two millennia in exile, Jews were treated with suspicion, derision, and violence everywhere we went, from England, to Spain, to Poland, to Persia, to Egypt. Of all of the countries in the world prior to the founding of modern Israel, only the United States has no history of widespread institutional violence against the Jews.

Indeed, although the Zionist movement calling for the reestablishment of a Jewish state began in the late 1800s, this dream was realized only after the world stood silent and allowed the Nazis and their collaborators to massacre 6,000,000 Jews – two-thirds of all of the Jews in Europe and one-third of all of the Jews in the entire world.

Regaining control of Judaism’s holiest site was of such immense importance to Jews everywhere that soldiers openly cried in the streets. To this day, Jewish visitors to the Western Wall often cry from the intense emotions of being at this holiest of all places. (This is why the Western Wall is sometimes disrespectfully referred to by non-Jews as the “Wailing Wall.”)

Despite Israel’s irrefutable legal and historical claims to the entirety of Jerusalem as its eternal capital, the Arab Palestinians whose forebears tried to “push the Jews into the sea” during her War for Independence still claim that the Western Wall and other Jewish holy sites in Jerusalem are somehow “rightfully” theirs. This despite the fact that there has never been a nation of Palestine in all of human history. Judaea and Samaria (the so-called “West Bank”) were part of Jordan until Israel gained control of these territories in 1967.  They were never a separate state of “Palestine.”

Six of the thirteen presidents since the founding of the modern State of Israel visited Israel while in office: Richard Nixon, Jimmy Carter, Bill Clinton, George W. Bush, Barack Obama, and now Donald Trump. Because Israeli control over the portion of Jerusalem containing the Western Wall is perversely considered to be “in dispute” by most of the international community, none of Mr. Trump’s predecessors ever went to visit that holiest of all places in Israel to Jews throughout the world.

Today, President Donald Trump became the first president have the courage and moral fortitude to visit the Western Wall. He donned a yarmulke (as is required), and quietly, by himself, approached the Wall. His thoughts were his own, but the picture above shows that this was indeed a sublime experience for our president, whose daughter and son-in-law are Jewish and accompanied him today.

By going into this “disputed” section of Jerusalem as a guest of the Israeli government, President Trump sent a loud and clear message that an undivided Jerusalem is, and always will be, the capital of the Jewish State of Israel.

By visiting the Western Wall as a guest of the Israeli government, President Trump sent a powerful message that will ring throughout the entire world: The Western Wall is, by history, by right, and by God, the sacred, indisputable, and eternal property of the Jewish people.

President Trump pledged during his campaign that he would be the president who finally would move the U.S. embassy from Tel Aviv to Jerusalem, which would constitute a recognition of Jerusalem as the capital of Israel. With his visit to the Western Wall today, Mr. Trump took a concrete and meaningful step in that direction.

Speaking for Jews throughout the world, Mr. President, I thank you from the bottom of my heart.