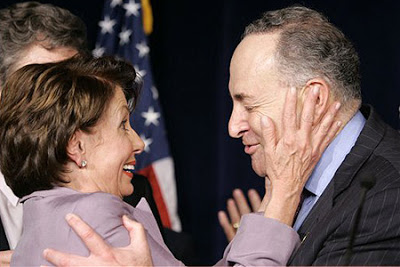 Someone needs to tell congressional Republicans that THEY WON THE ELECTION.

Last year, Republicans ran on a platform of repealing Obamacare, defunding Planned Parenthood, lowering taxes, cutting spending and overregulation of businesses, and building a wall to stop illegal immigration through our southern border.

THE VOTERS RESPONDED BY GIVING US OVERWHELMING VICTORIES: Majorities in the House and Senate and the presidency.

Since being sworn in, President Trump has followed through on his promises. He has proposed legislation to repeal and replace Obamacare, to defund Planned Parenthood, to cut taxes, to cut spending, to repeal burdensome regulations and prevent new ones from being implemented, and to build the wall.

At every step, congressional REPUBLICANS have thwarted those efforts.

Yesterday, the Congress passed yet another omnibus spending bill to fund the government through September. THIS BILL GAVE THE DEMOCRATS EVERYTHING THEY WANTED AND NOTHING REPUBLICANS WANTED: It fully funds Obamacare, fully funds Planned Parenthood, assumes no tax cuts, repeals no regulations, and provides no funding to build the wall.

Make no mistake about it: THIS WAS A COMPLETE AND TOTAL VICTORY FOR THE DEMOCRATS.

IF THIS IS WHAT REPUBLICANS GET FOR PUTTING MILLIONS OF DOLLARS AND MAN-HOURS INTO GETTING OUR CANDIDATES ELECTED, WHY EVEN BOTHER?

OF COURSE the “news” media will say bad things about us if we move on our agenda. The “news” media are the propaganda arm of the Democrat Party. That’s what they do. If we let them dictate our course of action, we have no reason to exist.

But the idea that the American people will revolt if we pursue our agenda is absurd. THEY ELECTED US TO PURSUE OUR AGENDA. AND THEY REJECTED THE DEMOCRATS BECAUSE OF THEIRS.

And the idea that Republican congressional “leaders” should be afraid to let the Democrats shut down the government is rank idiocy.

Do they really think the American people will embrace the Democrats for shutting down the government to preserve funding of an organization that mutilates babies and sells their parts on the open market?

Do they really think the American people will sympathize with shutting down the government to thwart efforts to stop illegal immigration?

If so, our so-called “leaders” need to step aside in favor of real leaders with a spines who believe in our conservative principles and trust in the common sense of the American people.

The Republicans in Congress are afraid of ours.

After an electoral victory of historic proportions that left the Republicans with more power and the Democrats with less than at any time since the 1920s, congressional Republicans had the wind at their backs to finally restore our country to the constitutional republic of limited government that it was designed to be.

The congressional Republicans chose instead to cower in fear and let the losing Democrats continue to set the agenda and enact their legislative goals.

Congressional Republicans had better wake up and grow a spine.

If they continue to act as cowards and allow themselves to be rolled by the Democrats, rank-and-file Republicans across the country are going to conclude that there is no point in bothering to help them get reelected.

After all, if the Democrats are going to run the show regardless of who wins, then why should we waste our time and money electing Republicans?

Trump’s Accomplishments Can and Will Be Erased With a Flick of...