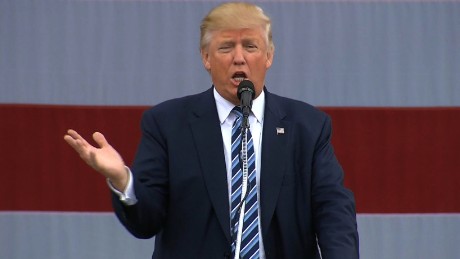 Mr. President, don’t let the headline of this column mislead you: You are doing a great job for our country.

Your policies already are spurring the economy, dramatically reducing illegal immigration, and restoring our country’s stature as the world’s only super power.

You’ve accomplished these things in spite of a spineless Republican Congress, a radically obstructive Democrat Party, and an openly hostile “news” media.

If you stay this course, you have the potential to be a Great President™.

But at the same time you are your own worst enemy because when you open your mouth, stupid words tend to come out.

In an interview airing today on SiriusXM’s “Main Street Meets the Beltway,” you said that Andrew Jackson “was really angry that he saw what was happening with regard to the Civil War. He said, ‘There’s no reason for this.'”

Mr. President, Andrew Jackson died in 1845, sixteen years before the start of the Civil War.

Less than two weeks ago, after you met with Chinese President Xi Jinping, you told the Wall Street Journal that “Korea actually used to be a part of China.”

Mr. President, the Korean Peninsula (there is no single nation of “Korea”) was never a part of China, and the governments of our adversary North Korea and our ally South Korea both took offense to what they perceived as an attack on their sovereignty.

At the beginning of Black History Month, you observed that “Frederick Douglass is an example of somebody who’s done an amazing job and is being recognized more and more, I notice.”

Frederick Douglass died in 1895 and has always been recognized as a pioneer in the battle for African-American civil rights.

Three days later, in a Super Bowl interview with Bill O’Reilly, you said, “California in many ways is out of control, as you know. Obviously the voters agree, otherwise they wouldn’t have voted for me.”

On other infamous occasions, you

♦ claimed through your White House Spokesman to have had the largest inauguration crowd in history (and then got into a spitting contest when the “news” media showed pictures depicting larger crowds for President Obama);

♦ got into a separate and embarrassing spitting match with Arnold Schwarzenegger over his lackluster ratings on The Celebrity Apprentice;

Look, I get that part of your appeal with the American people is that you are a plain-spoken man. I like that about you myself.

But there is a difference between being plain-spoken and being ignorant.

You can’t blame the hostile “news” media when they report on comments that are just plain factually wrong. That’s not “fake news” (even when they do it with such obvious joy and vindictiveness). It’s your job to not give them the kind of ammunition that they can use to undermine your work.

And you do have an enormously difficult job ahead of you repairing the damage of the past eight years and restoring our country. In order to get this job done, Mr. President, you are going to need the support of the people.

You are not going to get that support if you keep saying stupid things.

Please, for the love of God and the sake of our country, do as another bold and transformative Republican president once advised:  Speak softly, and carry a big stick.

Or, to put it in more plain-spoken language:  Shut. Up.