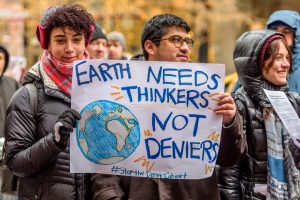 I’m not a scientist, nor do I play one on the internet.  I am a well-read man, and I understand that the earth’s climate changes for innumerable reasons.  Man-made activities are a part of climate change that negatively impacts both our climate and planet.  Deny that, and you have no credibility of any kind.  You are among the science deniers.

The questions on climate change are many with respect to just how dramatically man is effecting the change, and what if anything man can do to reverse those changes. Likewise, what does it really mean to reverse climate change?  That itself is “climate change.”  The climate has always changed, and it did so long before the rise of man, and it will do so long after the fall of man.  Those are facts.  What man can do to positively effect climate change, that’s speculation.  As some marched in the streets in astroturf protests against science deniers, I am certain we can make changes in one set of beliefs that will instantly save millions of lives.  It’s time to stop denying the adverse effects of science deniers and man-made abortion on humanity.

Since 1973 in the United States, man-made abortion has legally terminated the life of unborn babies the left and our government have rejected as humans.  Indeed, the entire premise of abortion is that human life doesn’t really begin until a mother permits a child to be born.  Before that time, whatever she is carrying is not human, lacks any rights, is entitled to no due process, and is subject to termination on demand.  For the left, the religion of abortion has suppressed the reality of science and the morality of humanity.  A fetus, they say, gains its life and humanity when it successfully hits the fresh air outside its mother’s womb.  Before that time, a baby is not a baby, it is not a life, and we give those babies no protections the left would fight to the death for … if the baby were an adult, convicted murderer, facing the death penalty.

This view is not merely science denying, it’s reality denying.

To support abortion, one must deny science. One must re-define what is growing in a mother, when it becomes human, and when it is entitled to live.  After all, if you can kill it for any reason or no reason, without due process, how could it be human life?  What science deniers do is they dehumanize life.  They say that it gets its value when it can think, feel, reason, or be “viable.”  These same people apparently never took care of an infirmed or aged person.

Some human lives never make it.  Just like some live to well over a hundred, others never successfully even attach to a uterine wall.  Nature is hard on humanity.  My wife’s grandmother lived to 110, yet some couples lose babies or pregnancies naturally.  People, are born with equal natural rights and dignity, but life has never been equal in outcomes.  We see that in the gifts, challenges and heartbreaking tribulations of human life.  However, nothing is more harsh on humanity than a death foisted on a baby by man-made abortion.

So warped has become our society, that if a baby is born on a Thursday and someone murders the child that week in a heinous crime, we heap national attention and sorrow on the loss.  However, if a mother aborts that same child three weeks earlier instead, it was never alive, never a life, and never worthy of our consideration.

We attribute value to the life not for its humanity, but instead for whether it was wanted.

When one takes to the street in support of science and to denounce those who reject science, one can’t do it credibly by picking and choosing the science one thinks is right or important.  In a study last year, 48% of republican voters thought the government should do more to stop climate change.  Meanwhile, 67% of self-described democrats are pro-abortion.  It appears the GOP has a stronger claim to supporting science.

If you are out in the street humping science but ready to return home and promote abortion, your “science” is not about the physical sciences, it is instead about political science.

We live in a country where our political affiliation now dictates what facts are true.  The partisans consider certain sciences just religion in the form of political zealotry.  I have no issue with people marching to support science.  Why would I?  Indeed, I’d like to see this country get back to investing in science and exploration, rather than redistributing money for political power from one group to another. 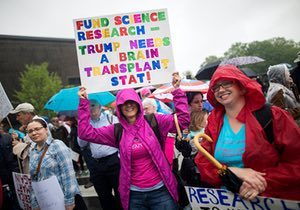 Make no mistake, these science marches and protests are part of the left’s continued war on Trump.  They are part of a false narrative that republicans and conservatives are “anti-science,” and the man who builds skyscrapers wants to take us back to the eleventh century.  The entire march for science exercise was a political canard where radicals again used rubes to create a false issue.

Embrace science … with a full hug.  Then … embrace independent thought.  The two will drive humanity much further than the religion of political affiliation.

Human life is immediately in peril … and the greatest, most immediate risk it faces is not from man-made climate change.  Every day, we lose lives to man-made abortion in the greatest denial of science the world has ever known.