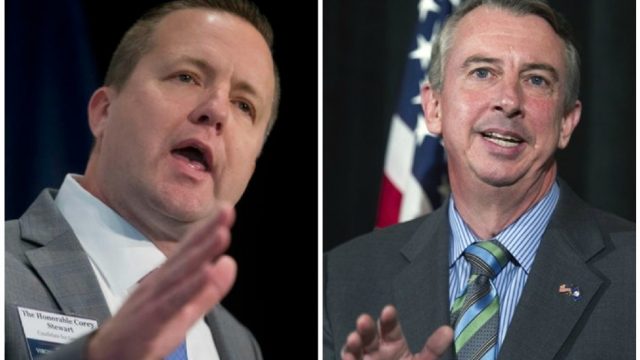 Ed Gillespie is going to win the GOP nomination for Governor in Virginia.  He gives the Republican Party its best chance to win in 2017.  Those are facts.  The 2017 race for Governor is going to be a tough battle for the republicans for many reasons, as I laid out here. If the GOP wants any chance at winning in the uber-backlash election, it must unite around Gillespie for the win.  The only person who can make that happen now is Corey Stewart.

The Republican primary battle is bitter.  It’s not at all a battle of ideas and ideals.  There is no grand strategic vision for victory.  It’s a short-sighted, street fight where each side seems determined not merely to win, but to alienate the other side.

The Democrats have an inferior slate of candidates at each level in these Virginia State-wide races.  Their candidates are weak in name recognition, but that party is strong in energy, money, and demographics.  The GOP has great strength in Gillespie’s name, but all of its energy and money is being chewed up in an internal struggle that will make uniting the party impossible.  If the GOP base is not united and energized, it can’t win in 2017.

The GOP primary has been marked by such painful in-fighting and blatant political hackery that in some ways it’s dispiriting to both republicans and conservatives.  I read various  blogs and republican related websites, and I sometimes cringe at the inability of smart party leaders to craft useful discussion around all their respective candidates.  So in the bag for one candidate or another are some of this blog sites, that otherwise thoughtful people can’t see how they have lost all credibility.

There is nothing wrong with strongly supporting one’s preferred candidate.  Adopting a positon of political cleansing and personal destruction, however, ultimately can’t help your goal if your goal is to win a state-wide election under one tent.  Political myopathy in this Virginia GOP nomination process is leading to hysterical blindness.

Ironically, the one man who can pull the plug on this tomfoolery is Cory Stewart.  He is the one candidate who cannot win the 2017 election for the GOP.

To be clear, I like Cory Stewart.  I like Ed Gillespie too.  If you stood their policy positions side-by-side, I’d be closer to Stewart on core issue.  If you stood their conduct side-by-side in this campaign and asked me which one best represents conservative values for Virginia, I’d stand much closer to Mr. Gillespie.  Neither candidate is perfect.  Since the only choice I agree with 100% of the time is the author of this piece, and a non-candidate, I am forced to analyze the race and the candidates realistically.

Moreover, I’m not humping for a job or an appointment from either.  In this role, I am looking at how the GOP can best mount a winning campaign in a state where political demographics are against our conservative values, and where the result of the 2016 Presidential election will be a net disadvantage to those GOP chances.

Cory Stewart is a brawler.  He’s a puncher.  He’s a fighter.  In a normal race where all other factors draw even, I would be secretly, if not openly cheering for Stewart.  On one of the most important issues of our time, nationally and in Virginia, Stewart stood tall … long before any politician would stand at all.  He fought illegal immigration with every tool at the disposal of a local elected official. When he did it, he was vilified by the media, pummeled by the democrats, and snickered about by establishment republicans who sold out Americans for cheap labor.  Those are the facts on that issue.  For that reason, Cory Stewart earns my respect and thanks.

In the end, however, state-wide races are about all the issues, the right timing, the money, the support, and the political reality on the ground.  Likewise, they are about the ability of a candidate to best connect with the most number of voters.  Against that backdrop, 2017 is just not the year for Cory Stewart.  To be clear, he knows this.  He has to grapple now with his own fighter’s instinct.  He has to look in the mirror and ask himself, “if I step out of the race now, am I quitting … or am I helping my party win the election?”   Fighters like to fight.  Steward now has to decide if he wants to come out of this a winner.  Below, I will suggest exactly how he can do that.

Ed Gillespie has run a fine campaign.  He has not been personally drawn into Stewart’s street fight.  He has money, name recognition, significant infrastructure support in the party, and a reputation built off his remarkably successful losing Senate campaign.  Capable as Stewart is, Gillespie is the only choice the GOP has in this election if it wants a chance to win.

In the interparty struggle, Gillespie has been the “winner” because the man Stewart calls “Establishment Ed” has used his strong, long, and vast experience at the highest level of GOP politics and campaigns to run a strong campaign where the candidate stays above the fray, and his foot-soldiers do all the dirty work.  As vitriolic and sharp as Stewart has been toward Gillespie, team Gillespie’s water carriers have been every bit as nasty in return.  The wise Gillespie has his hands completely clean.

The result of all this, as I note above, is that the sides are digging in and unity is slipping out of reach.  If the GOP has no unity in 2017, all of this will have been for nothing.

If Corey Stewart decided to step back right now, he would help Gillespie and the GOP.  I think he knows that.  The question then becomes, why help team Gillespie?  Why not run this out to the end and stand on principle?  Standing on principle is admirable, and it is one quality Stewart showed me that earned my high regard for him.  The answer here is simple.  While this race is a zero sum game, politics and Mr. Stewart’s political career are not.  This race is over.  His career is not.  If, however, Stewart is buried in the primary, his career might be over on any state-wide ticket.

If Stewart and Gillespie were to sit on my deck in purple Loudoun County, I could and would gladly show them both why unification now is in both their political interests as well as the party’s interest.  To be sure, Stewart is not going to step aside while team Gillespie’s foot-soldiers are waging Jihad.  Likewise, he is not going to step aside without having some public love, and some assurance that he will have a seat at the table on important issues that he rightfully deserves.  No one knows those political realities better than Gillespie.

Likewise, Gillespie is smart enough to know that Stewart riding this race to the finish prolongs, makes worse, and adds to the division in the party, and among conservatives.  Likewise, it alienates completely that energetic populist wing that Stewart commands.  With each day, each tweet, each carefully placed op-ed and hit piece, the rancor and division grows.

If Gillespie wants to win, he needs Stewart.  If Stewart wants a chance to run again and be viable, he needs Gillespie.  The partisans in each camp, particularly the fire-bomb throwers may not believe or like that, but their ignorance of those facts does not change the reality.

The only way the GOP wins the Governorship in 2017, is with a perfectly run campaign, a bit of luck, party unity and energy forged through a real coalition.

Stewart and Gillspie are not enemies.  This isn’t good versus evil.  This isn’t ISIS versus the Americans.  This is two men in the same party trying to figure out who best can represent the party and win the highest office.  I’m not asking either man or camp to solve world peace.  I am flat telling them that a political solution and real, substantive, coalition and partnership is in their interest and that of their party.

Having the right person at the top of the ticket, and having the party unified is critical because this election is bigger, much bigger than just the Governorship.  The Virginia Republican party has to know that it is on the national stage, and it is a target of national democrats and the anti-Trump, anti-Republican #resistance.  A GOP win in Virginia in 2017 may be the final death-knell to the anti-American resistance movement trying to destabilize our country over the loss of the 2016 election.   A blow-out win for the democrats gives that resistance, its leaders, foot-soldiers, and financial backers new life.

Likewise, here in the Commonwealth, a blow-out win by the Democrat could change the balance of power in General Assembly, or set the stage for problems in an already tight, one seat Senate majority as we look ahead.

Moreover, it is critical that the GOP have strength at the top of this ticket because the Democrats have an incumbent Attorney General.  If any statewide elected official deserves to lose, it’s Mr. Herring.  The GOP has a remarkable candidate for AG, and that candidate too could be swept out in a loss if the GOP doesn’t get its house in order at the top of the ticket.

If Herring wins in 2017, look for him to return and run for Governor in 2021, with the advantage of being a two-time state-wide winner.   That would strongly disadvantage whomever is the candidate for the GOP.

The GOP needs unity to support this ticket.  Stewart can bring that, if Gillespie and his team make it happen.  However, when Corey Stewart looks in the mirror, he needs to see staring back at him a party leader, and not merely a one-time, one-chance, prize-fighter taking his only shot at the title.

My deck is open most nights.  The wine is good.  The conversation is real … and the analysis for both candidates is free.  I am happy to broker this deal.

In Virginia Election: A Referendum on Decency (Updated: Northam tied to...