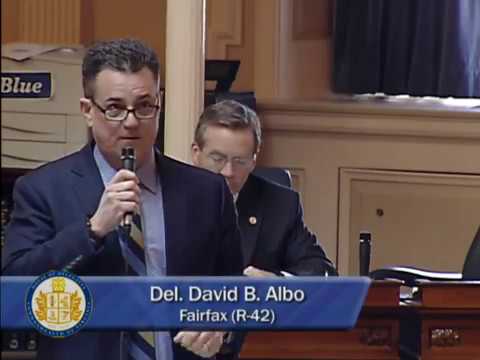 The Commonwealth has its incentives all wrong.  Our political system encourages candidates disconnected from working Virginians, often wealthy carpet-baggers, to come in and run for Governor.  Unfortunately, it discourages working Virginians from running or staying in the General Assembly.   Democrat,  Republican, moderate, conservative, or liberal, the Commonwealth needs more Dave Albos and fewer Terri McAuliffes.  When the Assemblyman Albo bowed out in style, many missed the true message of his departure.  As he declared, “Albo Out,” it was Virginia that was out of luck.

Virginia needs many reforms, and chief among them are the structure, pay, and incentives necessary to attract and retain great public servants.

A member of the Virginia assembly makes $18,000 a year for his or her service.  Why don’t we make them ride to the state house on horseback too?  Let’s issue them a quill pen and some parchment as well.  How about a free bag of oats for their steed?

Virginia pays its court-appointed lawyers the lowest amount of money in the country.  When people ask me why, I often jokingly say, “because there is no constituency for public defense of accused criminals.”  That’s flippant, but sadly true.  Likewise, there is no hue and cry to increase the pay of politicians.   In a dysfunctional society, sadly many feel politicians are already making money in the game somewhere.

Being a member of our general assembly is a full-time job even if it is not categorized as such. When Albo shocked his colleagues and announced his retirement, he noted that he could not financially continue with his legal practice being in session nearly 100 days a year.  And, when a representative is not in session, he or she is and should be meeting constituents, going to their events, and giving as much time as possible to their issues, concerns, and ideas.  By every measure, Dave Albo did that for 24 years, with honor, grace, style, and substance.  Ironically, he paid a much bigger tax for his losses of income than anyone paid for his time, effort, or expertise.

Underpaying our lawmakers is bad business and bad politics.  We don’t want people to serve for the money, but we don’t want great people to pass up service or quit serving because of the money.  As I was taught in law school and later taught my law students, incentives matter.

I too considered a run for office in my district, following a retirement by my representative who left as well because of the strain and toll on his business and personal finances. Maybe I would have lost.  Maybe the Commonwealth would be far better off without me.  The problem is, it’s not just me, or David Albo, or David Ramadan.  How many people who might serve can’t do it simply because Virginia has a system designed to limit service?

Virginia loves is traditions.  Likewise, we enjoy the quaint notion of the citizen servant who does not become a professional politician.  I get that.  I am sympathetic to that high ideal.  However, I don’t want to leave the governance of the Commonwealth solely to the wealthy, or those whose jobs will subsidize their position.  That’s an issue onto itself.

Some might say, “David Albo is lawyer,” he can afford it.  I know David Albo and his law partner.  In fact, I know, practiced with, taught, and sent into the workplace innumerable lawyers.  Most lawyers, nearly  90%, work in offices of 9 or fewer lawyers.  Unlike the idea that most lawyers work for giant firms and make a half-million dollars, the reality is that most lawyers in the Commonwealth work in small firms or solo offices.  When they don’t work, they don’t get paid.  They are quite literally small businessman who, if away from their practice for 3-4 months, can’t work or generate revenue.  Again, making a case for the “poor lawyer” is not exactly reaching out to a large constituency either.

We have 8.3 million people in the Commonwealth.  They deserve talented, qualified public servants.  Those servants ought not be asked to sacrifice their ability to pay a mortgage, run their business, or put their kids through college in order to serve us.  If we do that, we reduce dramatically the pool of talented, ethical, qualified, candidates connected to our communities who can serve the Commonwealth.  Why in a 52 billion dollar budget would we want to do that?

Dave Albo was the head of the Court’s committee.  His skills in the legislature were remarkable, and he has been there through every political upheaval since 1993.  He showed a unique ability to work for our Commonwealth across party lines.  We don’t need less of that, we need more of it.  In his primary committee role, he oversaw the critical process of filling Judgeships in the Commonwealth.  We pay law deans in public institutions nearly half-million dollars to make new lawyers, but the man in charge of finding and recommending good judges was paid $18,000.  Does that make sense?

Most of the articles on Delegate Albo’s surprise announcement focused quite rightly on his outstanding career and service to Virginians, quite literally a debt we can neither repay … nor a service for which we ever adequately paid.  Every heap of praise Mr. Albo received was deserved.  The story of his departure, however, is a story of a dysfunctional political system in Virginia in need of immediate reform.

No elected official wants to be the first to raise the issue of pay inequities for public service.  Unelected, and not running, I do it gladly.

We all have had someone who has said to us, at least once, “you get what you pay for.”  In Virginia, we are building a system where we won’t pay for excellence.  The job is tough, demanding, and at times unrelenting.  It requires skill, savvy, and expertise.  We wouldn’t advertise for such a position in any company at that pay and we ought not do the same for those in whom we trust to run our Commonwealth.

It’s time to saddle-up and embrace reform in how we pay and retain our elected officials.

To the very Honorable Dave Albo … thank you for your service and sacrifice.