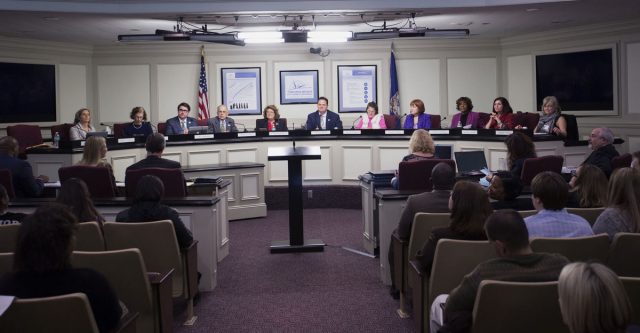 One of the first things she did upon becoming chairman at the beginning of this year was to unilaterally change the biography on the school board web site of one of the other members because she disagreed with that member’s views on a matter of school policy.

Even the liberal Virginian-Pilot editorial board called on Chairman Anderson to apologize for her spiteful action, stating, “It’s especially curious that Anderson would choose to overstep her authority on such a trivial matter, for no other reason than because she felt she could.”

A positive result of Chairman Anderson’s antic was that at a subsequent retreat, the school board unanimously agreed that no one member, including the chairman, has the right to speak or act on behalf of the entire board unless the board specifically authorizes them to do so.

At a school board workshop this past Tuesday, Anderson opened the meeting by telling the members that they are prohibited from expressing any opinions to the public about any action taken by the board. She said that all members are expected to support all actions of the board whether or not they voted in favor of that action.

Don’t take my word for it. Let’s go to the tape:

That’s right. During the Reign of Queen Beverly, the elected representatives of the people of Virginia Beach are prohibited from sharing with their constituents their views on matters of school board policy once the board has voted.

In defense of this retraction of board members’ First Amendment rights, Chairman Anderson told the members to remember that each of them represents the entire board to the public. This statement is contrary to the policy agreed to by Chairman Anderson just two months ago that no member of the board represents the board as a whole unless specifically authorized to do so.

When a school board chairman violates members’ free speech rights, what message does it send to the students?

Someone should send Beverly Anderson a memo.