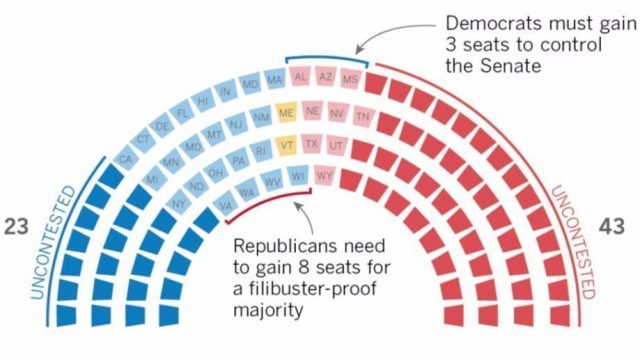 Republican Senate Majority leader Mitch McConnell said Judge Gorsuch will be confirmed by the Senate this week.   We’ll see.  This seat came open on the sudden passing of Judge Antonin Scalia more nearly 14 months ago.  Since then, the power of the High Court has hung in the balance, and this appointment has been marked primarily by political intrigue and high stakes political poker by the two parties.  If Gorsuch is confirmed, it will because the Republicans will have nuked the filibuster.  Democrats want that result because this Supreme battle is really about the Senate.  Here is your Gorsuch primer on just how we got here and what it really means.

On February 13, 2016, Justice Scalia passed away in his sleep while on a hunting trip in New Mexico.   He had not been sick, and there were no rumors of ill health or the Justice considering retirement.  In that sense, his death was a complete political and judicial surprise.  In another era, seemingly in another country, Scalia was approved for the Supreme Court by a 98-0 vote in 1986.

Scalia became a lion of the Court, and a giant in legal circles.  He was revered by honest court watchers and detested by partisans.  His public persona was larger than life.  He had a rambunctious style, scathing dissents, and utter that made being a Supreme Court Justice cool.  He wrote with wit, elegance, and ease.  Sometimes his opinions were a work of art, with color and texture that leapt of the page.  Other times, they were brutal and honest, like an R rated movie.  No one could ignore a Scalia legal opinion.

It was the next year after Scalia’s appointment in 1987, when the Senate democrats created the modern model of the political litmus tests.  They voted down the eminently qualified conservative Judge Robert Bork.  Indeed, the act of political assassination and partisan voting came to be known as “Borking” a nominee.  Since that time, the fight for nearly every High Court seat has been more about political drama, identity politics, and issue litmus’ tests.  Perhaps Scalia’s transformation of the Court played a role in that reality.  However, far more likely is the reality that major “legislation” simply never moves through the Congress.  It is instead, made by the Courts.  As a result, parties have come to realize that no matter what they do or don’t do, issues are resolve by the men and women in black.  Believe what you want, but right now nine people ultimately rule this country, and they are an increasingly political and predictable group.  As such, the process of appointment has become more political.

The Court and Balance of Power

Scalia’s death, in the view of some, presented Democrats with an opportunity to swing the majority of the Court from 5-4 right-leaning to 5-4 left-leaning.  For those who don’t watch the Court closely, the teams are as follows:

Most court observers consider Justice Kennedy part of the center-right coalition.  However, on major issues he has consistently sided against the more conservative justices.  Accordingly, many Constitutional conservatives would view his lack of predictability and his failure on major issues to be evidence that the Court, right now, is really a 4-3-1 split in favor of left-leaning Justices.  That’s my view.

By every calculable measure, Merrick Garland was qualified to sit on the Supreme Court.  That, of course, assumes that judicial philosophy doesn’t disqualify a candidate.  When Justice Scalia passed away in February of 2016, the right to fill the vacant seat fell to President Obama.  He nominated a well-respected, liberal jurist who he billed as a centrist.  Moreover, Garland was an older candidate, and as such, his nomination was designed by Obama to pass through the Republican controlled Senate in an open seat presidential election year.  The design was flawed.

The Republicans blocked Garland.  This is a near civil war point of contention with liberals, who somehow consider the blocking of Garland to constitute a “stolen seat.”  In reality, not since the 1800’s had a President successfully appointed and filled a Supreme Court vacancy in a presidential election year with an open Presidential election.  Of course, very few of those ever came up.  Nonetheless, and not surprisingly, the GOP wanted to make the Supreme Court selection an election issue.  In fact, they had to do that.  If they didn’t they would have ceded complete control of the Court to the left.

The Republican Senate advised the President that they would not grant that nominee a hearing or a vote in the election year.  That, by the way, fulfilled its Constitutional duty.  The Democrats squawked, but ultimately, they had great confidence in winning both the Senate and especially the White House.  In most circles, the real question on Garland was this:  Once Trump lost, would the GOP rush to confirm him to prevent Hillary from naming a younger, more radical pick after inauguration?

We will never know if the Democrats would have dumped Garland because inexplicably, Mr. Trump won.  Not only did he win, but he made the Supreme Court a huge issue, and he did so to try to bring home conservative voters terrified at the loss of the Court.

Once Trump won, the left went crazy.  Obviously, the left not only went politically crazy, they suddenly woke up and realized that the GOP’s improbable political gamble on blocking Garland paid off.  This reality and the 2018 Senate election now drive the Supreme Court nomination process.

In one of his finer moments, President Trump nominated Judge Gorsuch to the Supreme Court.  Gorsuch is one of the finest judges in the country, and like Garland, is qualified by every calculable measure to sit on the high court.  Having made the Supreme Court an election issue, the republicans then won the Presidency, House, and Senate.  By every account, they have the approval of the American people and the new President must fill the vacant Supreme Court seat.

Democrats don’t see it that way.

Democrats have no substantive objection to Gorsuch, though some make noise that his judicial philosophy is outside the mainstream.  It’s not.  It is, however, a judicial philosophy that is consistent with constitutional conservatism.  Mostly, however, Democrats are still contesting the legitimacy of the elected president and the outcome of an election they claim was hacked, stolen, crooked, or improperly influenced by either the Russians or our own FBI.

Judge Gorsuch is now the man in the middle of a political fight to the death for this Court.  The death, it appears, will be the Senate procedural rule that requires 60 Senators to end debate on a candidate in order to call a vote.  This is loosely called a filibuster.  It’s not.

The party in control of the Senate makes the rules, and the 60 vote rule of cloture can be changed, permitting a “majority” vote to call a vote.  The Democrats eliminated this requirement when they controlled the Senate for every judgeship other than the Supreme Court.  When they did so, they packed the lower courts with their political appointees, preventing the minority from any substantive tool to stop them.

Now in control, the GOP has promised to do the same for Supreme Court appointments, thus ensuring that Gorsuch will be confirmed.  The real question is this: will the GOP do it?  As I have written previously, this is exactly what the Democrats want and need.  They need to build the case that the GOP stole the election, stole the Supreme Court seat, and then changed the rules to push a radical on the bench.  They need this issue to win back the Senate in 2018, and if they do, stop any future Trump appointee.

It is the ultimate supreme gamble.   Democrats are willing to let the Republicans, with Gorsuch, return to the pre-Scalia 4-4-1 split that leans right.  If the Democrats gamble pays off, however, they will win the Senate.  If they are really right, Trump will never appoint another Justice, and they win back the Presidency in 2020.  Once that is done, they will be replacing multiple Justices, if only based on actuary tables.

If the Democrats are wrong, and they don’t win in 2018, it appears Trump will get at least one more appointment before 2020.  In fact, he could get more.  He could get both unexpected appointments where Justices are retired by father time, or he could get strategic appointments where older Justices step aside in order to allow Trump to appoint, with a simple majority, conservative justices who will serve for 25-30 more years.  That’s how big this gamble is for both sides.

Gorsuch will be the next Supreme Court Justice.  That’s already done.

This entire fight is about which party controls the Senate in 2018, and as such, who can tilt the future balance of the Supreme Court.  It’s all politics now.

One wonders what kind of country we might have if the parties worked this hard on legislation, rather than on building the perfect High Court to do its bidding.