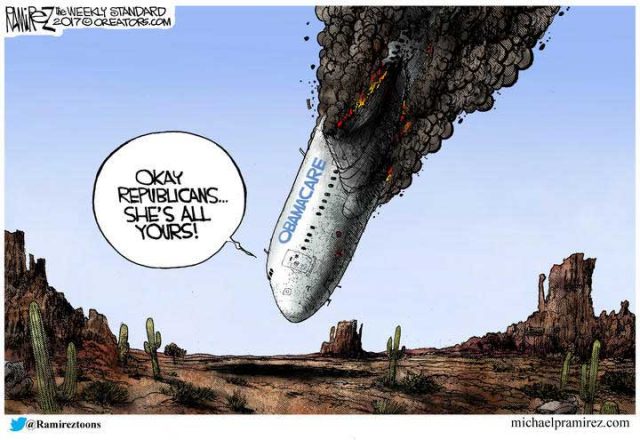 The political genius of Obamacare is that it was designed to fail.

The idea was to create a system that depended on everyone getting their health care through health insurance but also that ensured that health insurance companies could not survive under the onerous regulations imposed on them.

The result would be that the entire health insurance industry would collapse, leaving the American people with no choice but to accept a “single-payer” (i.e. socialized medicine) system – the culmination of a century-long dream of the Democrats.

You don’t need to take my word for it.  Then-Senate Majority Leader Harry Reid specifically admitted it:

“Senate Majority Leader Harry Reid (D., Nev.) was asked whether his goal was to move Obamacare to a single-payer system. His answer? ‘Yes, yes. Absolutely, yes.'”

Furthermore, prior to becoming president, Barack Obama spoke frequently of his support for a “single-payer” system and about how we would need a transition step to end employer-provided insurance coverage:

“I happen to be a proponent of a single-payer health care plan . . . . A single payer health care credit–universal healthcare credit. That’s what I’d like to see, but as all of you know, we may not get there immediately.”  -remarks to AFL-CIO, 2003

“But I don’t think we’re going to be able to eliminate employer coverage immediately. There’s going to be potentially some transition process. I can envision a decade out or 15 years out or 20 years out.” -3/24/07

“[I]it is my belief that it’s not just politically but economically it is better for us to start getting a system in place–a universal healthcare system signed into law by the end of my first term as president and build off that system to further to make it more rational…. By the way, Canada did not start immediately with a single payer system. They had a similar transition step.” -8/4/07

So how exactly was Obamacare designed to fail? Consider that one of the main impediments to universal coverage was the ability of insurance companies to deny coverage to people based on preexisting conditions. (The reasons why insurance companies should, in fact, be able to do so is a subject for another day.)

The theory expressed by Obamacare supporters was that we could force insurance companies to cover preexisting conditions without becoming insolvent by forcing everyone, including young healthy people who don’t have many such conditions, to purchase health insurance (the famous “individual mandate”).

The losses that insurance companies would incur by covering people with preexisting conditions would be more than offset by the premiums paid by healthy people who would not require medical services equal to those premiums.

In other words, Obamacare purported to be a system whereby wealth would be redistributed from young healthy people to pay for health services for older less healthy people.

However, the Obamacare scheme contained a provision designed to make this system fail: Under Obamacare, parents can keep their kids on their policies through age 26.

This provision was deliberately designed to ensure that the very young and healthy people whose premiums would be needed to offset the losses for covering preexisting conditions would not be in the consumer pool paying those premiums. The intended result was that within a few years the insurance industry would collapse, paving the way for the Democrats’ long-desired “single-payer” socialized medicine system.

The design to fail has, in fact, been working. Nominally, there are about 12 million more people insured under Obamacare than prior to its implementation, but that number is deliberately deceiving. Insurance premiums, deductibles, and co-pays have skyrocketed to the point that the previously uninsured people who now have health insurance (and provide the Democrats with bragging rights) can’t afford to actually use it, and 5 million people who previously had insurance have been forced to drop it (and incur the penalties under Obamacare for doing so). Furthermore, many insurance companies are pulling out of Obamacare markets in order to survive or just going out of business altogether.

When the Democrats passed Obamacare, it was intended to be the interim step described by Obama in years past that would lead to “single-payer.” One of the assumptions that the Democrats made was that Hillary Clinton would succeed Obama as president. She would then be able to claim that insurance markets have failed and use that as the basis to impose a socialized medicine system on the country.

The plan went awry when Donald Trump had the audacity to defeat Clinton and assume the presidency. Although Trump himself has in the past advocated for a “single-payer” system, he ran for president on a platform of repealing Obamacare and replacing it with market-based reforms. And that’s the agenda he has been pursuing as president.

So now the Democrats are falling back to Plan B: Blame the Republicans when the Obamacare system collapses.

They are already laying the groundwork for that argument. They claim that the Trump administration is sabotaging the system and not allowing it to work as intended.

But the fact is that the system was already failing before Trump took office. And one of the first things he did as president was work with congressional leaders to draft the American Health Care Act to begin the process of repealing and replacing Obamacare.

Not one Democrat was willing to support any such effort, so it is obviously specious for them to claim that Trump and the Republicans are responsible for the consequences of the status quo designed and passed on to them by those same Democrats.

The truth is that the Democrats deliberately armed and handed the Republicans a ticking time bomb and are preparing to blame the Republicans if it explodes for not figuring out how to defuse it.

President Trump and Senate Majority Leader Mitch McConnell have both stated that their strategy in the wake of the defeat of the AHCA last week is to let Obamacare implode with the belief that the Democrats will then be forced to come to the table to reach a deal on health care.

This belief is wrong and dangerously naive. The Democrats want Obamacare to implode and look forward to the Republicans getting the blame.

President Trump and the Republican congressional leadership cannot afford to sit back and let Obamacare take its disastrous course. They must come together and develop a realistic plan to repeal and replace Obamacare and get it passed, and they must do so immediately.

If they don’t, the Republicans will suffer massive losses in 2018 and will lose the presidency in 2020.