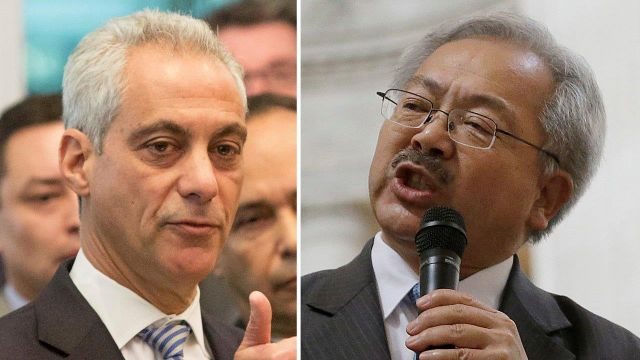 Federal criminal law provides a solution for sanctuary cities led by radical, open-borders, politicians who harbor illegal aliens.  Rather than penalize the lawful citizens, why not prosecute Sanctuary City leaders?

Is that a radical idea?  No, it’s the law.  It’s a federal felony to encourage an alien to enter or stay in the United States.  This is not some old, antiquated, archaic law.  It was part of comprehensive immigration reform, and it is the best, never used weapon available to combat open lawlessness by elected officials who are encouraging aliens to come to their cities and then harboring those aliens.

This conduct is a felony.

Ironically, lawmakers made it worse for those who harbor and solicit illegal aliens to come or stay here than it did for the aliens themselves to enter illegally.  Illegal entry is a ‘crime’ in the sense that it is misdemeanor.  It’s worth noting that open borders advocates often angrily denounce the term “illegal alien.”  The term reflects the often true reality that most illegal aliens did enter illegally, though it is true that those here on a Visa who overstay are merely guilty of the civil violation of being, “undocumented.”

In a perfect world, we would return those caught entering illegally or those overstaying their welcome.  However, immigration reform targeted those who exploit illegal aliens for additional punishment.  It specifically sought to punish those who encourage illegal aliens to come here, or once here, induced them to stay here in violation of the law. It likely did so recognizing that such conduct creates incentives for mass illegal immigration.  Accordingly, the law sought to punish the exploiters more than the exploited.

Sanctuary city leaders are alien exploiters. They are federal felons.

The anti-harboring provisions of 8 USC 1324(a)(1)(a)(iv) are clear.  Indeed, while some might argue that an elected official receives dispensation from these laws, no such exception exists.  Whether one pays to smuggle illegal aliens into the country or one sets up a political infrastructure to harbor illegal aliens to induce them to come or stay, the legal jeopardy is the same.  The politically motivated profiteering that gives rise to harboring is still a felony.

The law targets anyone who “encourages or induces an alien to come to, enter, or reside in the United States, knowing or in reckless disregard of the fact that such coming to, entry, or residence is or will be in violation of law.”

When we talk about cutting funding to sanctuary cities to punish elected leaders, we are really talking about punishing Americans who live lawfully in that city.  Cutting federal funding hurts many Americans who don’t want to give sanctuary to illegal aliens.

The anti-harboring law allows us to attack narrowly those who encourage illegal entry, who give out state funds, who provide shelter and other material accoutrements to both induce illegal aliens to come to or stay in their cities.  In fact, these inducements come often in very public political pronouncements.

The declaration that one’s city is a “sanctuary” may be enough of under the law as broadly written to meet the standard of a “knowing or in reckless disregard of the fact that such coming to, entry, or residence is or will be in violation of law.”   These leaders know people are in their cities illegally.  They shield them from the law. They encourage them to come and avoid federal authorities, and the cities are openly hostile to federal immigration officers.  In many cases, the acts of elected officials are particularly damning when those officials speak openly of the intent behind their harboring.

Ironically, federal courts have now twice stopped the President’s ban on travel from war-torn terror countries saying the President’s statements demonstrate that the law is nothing more than a “Muslim ban.” One judge even said that the ban as written might be neutral, but due to statements by Mr. Trump, it is unconstitutional.  There are many problems with that analysis.  However, the corollary in the case of sanctuary cities is quite the opposite.

In some states, cities and counties, for example, leaders not only speak of protecting illegal aliens from the feds, but they create laws whose purpose it is to provide protection and support, material and otherwise, to such illegal aliens.  The laws violate the anti-harboring statute, and the statements show the intent to do so.

Any reasonably competent US Attorney could indict dozens of Mayors and state officials based on their acts, actions, and statements as they relate to harboring illegal aliens. There is no greater disrespect of the rule of law than when lawmakers and executives openly defy laws with which they disagree.  Sanctuary cities are nothing more than illegal harboring zones set up by federal immigration law deniers. These cities represent an active effort to violate our federal immigration laws and to induce illegal aliens to enter or stay in the United States at the detriment of our citizens.

The US should prosecute the criminals behind this conduct.

Any full-frontal assault on the illegal alien infrastructure must start with the rule of law.  It is time, indeed, past time, that we put to work the comprehensive immigration reform of the 1990’s to aggressively pursue individuals engaged in harboring activities, whether they be smugglers, disreputable businesses, college presidents, or elected officials.