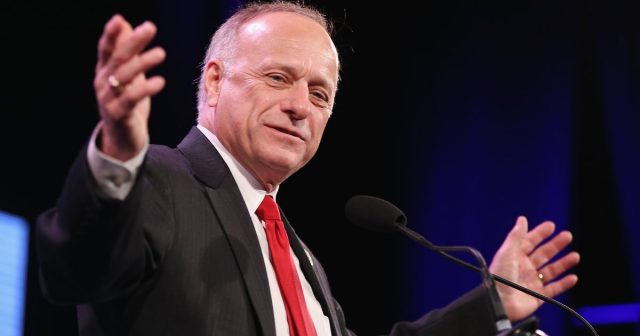 Western civilization is great.  In fact, it’s a superior method of social order, history, morality, and law, than competing world visions and cultures.  As such, it deserves a better spokesperson than Iowa Rep. Steve King.  Discussion of such issues is beyond the intellectual grasp of many or the emotional capabilities of most.  For some, they got to the word “superior” in my second sentence and they already think I am a racist, hate-mongering, xenophobic, fill-in-the-blank, white nationalist.  Make no mistake, if you discuss issues of race and culture, you will find and attract ignorance and hate.  No assemblage or words, facts, history, or data will assuage the naked emotion some have that prevents them from thoughtful examination of difficult issues.  The Steve Kings’ of the world don’t help.

When one assembles one’s critique of other cultures in the way Steve King did, thoughtful examination isn’t possible. Western civilization isn’t better or superior because of the immutable characteristics of some segment of the culture, it’s better because reason, logic, compassion, and the rule of law intersect to create a common culture all should emulate.

The left has for years been teaching and preaching that it is wrong and immoral to judge other cultures or to assume that any culture is superior to another.  That’s dumb.  In fact, that’s a political culture improperly judging you, which is ironic.

There are nearly seven billion people on earth, and we should set their value by the quality of their acts and the decency, intelligence, and compassion they display.  We do not define great people by color, language, geography, religion, sexual orientation, or political ideology.  Their character defines them.

When people act collectively … they form a common culture.

We define great people and cultures by their acts of courage and compassion.  As such, we evaluate those cultures for their respective contributions to the principles of liberty, free-markets, the rule of law, and the civil society.

The world would be a hell of a lot better if some set of immutable characteristics could help us identify exactly who such people are.  Those markers don’t exist.  We must judge them not by how they look or speak, or to whom they pray … but instead in how they act.

Western civilization isn’t superior because the people are better than other people.  That’s dumb.  Western civilization is a remarkably broad, diverse, and amazing cross-section of people.  What makes Western Civilization great is that we order ourselves around liberty and free markets.  We believe in a set of laws devised by the people and entrusted and enforced through a common culture that respects law maker, law giver, and law followers … all sharing the benefits and burdens of liberty.

Steve King’s remarks reduce Western Civilization to race, religion, ethnicity, and language alone.  Yes, you bet those could play some factor in acculturation into Western Civilization, but those factors set up no set of requirements, obstacles, or predictive outcomes for any individual to successfully enter and contribute to our culture.

I don’t believe any individual cannot be a successful part of Western Civilization if that individual or group adopts Western civil values.  To assume that all Muslims cannot do so or that all members of other religions and races cannot do so is ignorant.  Likewise, to assume that white Christians born in the United States improve our culture merely because they are white or born Christian is equally ignorant.

Make no mistake, innumerable cultures do not value liberty, law, and the civil society the way the west does generally.  Yes, some cultures and some religions put nearly no value on liberty or the civil society.  We cannot ever excuse or pretend that such cultures are equal or deserving of our respect.  They are not.  In fact, we do them and us a disfavor by equating these cultures with our own.  That reality does not put us at war with such cultures, nor is it right or proper to impose upon such cultures our value system.  That’s not our problem.

Likewise, we will not have a culture or its people impose values contrary to our own on us.

Where another culture clashes with us and attempts to foist on us elements of a broken system and culture, we must reject those elements.  Ironically, one of the great missteps and misdeeds of the left, and indeed of American immigration policy, is that our government does not encourage acculturalization in order to make a claim to come here.

Western Civilization values suggest strongly that Americans ought not be closing its doors to anyone who can provide a benefit to our country, and who wants to become an American.  Inherent in that statement is that they come here legally, as needed by us and at our invitation.  Our immigration system should be uninterested in people who merely want to come to America or whose life America might improve by permitting entry.

America should be interested in people who want to be Americans.

Americans identify around the values of Western Civilization.  They are secular, civil minded, and interested in a free-markets, liberty, and the civil society.  We share a common culture that we improve through the addition of the best elements of other cultures consistent with our values.

If you are coming here to be something else … then we don’t want you.

We like our culture, and we don’t want to replace it, nor would we ever let those applying for the benefits of citizenship begin the relationship with a set of demands to change who we are or what we have worked to build.

Wilders understands that culture and demographics are our destiny. We can't restore our civilization with somebody else's babies. https://t.co/4nxLipafWO

King’s controversial tweet is wrong for many reasons.  I’d like to think it lacked precision, rather than believe it to be so foolish.

Culture and demographics are not the same thing.