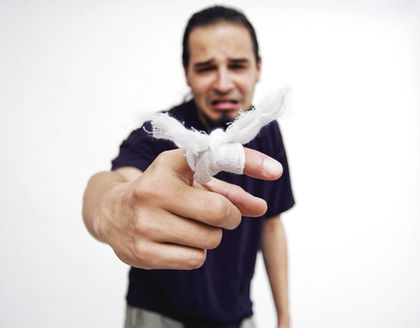 We all have that one friend. The one you met for the first time and you were sure they were dying. Man, you felt so bad for them. They had some terrible illness that was sure to snuff out their life. Then they didn’t die. And, you realized, after maybe the second or third time you made the mistake of asking, “how are you?” that they would give you a long, twisted, medical history.  Suddenly, it dawned on you; their version of hysterical self-diagnosis had no basis in reality. Your friend is a Hypochondriac.  Guess what, this country is filled with political hypochondriacs.

I’m fond of saying, “If everything’s a big deal, then nothing is a big deal.” How many times can a person cry wolf to you before you start ignoring them? We all have our faults. My lack of patience for attention-seekers, hypochondriacs, and self-pity wallowers is certainly one of mine. This probably stems from watching my Mom die of lung-cancer with an oxygen mask on, while using one hand to lift the couch as she vacuumed under it.  I can still hear her yelling at us to stay out of her way when we tried to do it for her. That’s old school tough. That’s how we roll in my house. But I digress.

So this morning, I turned on the news to watch Nancy Pelosi screaming for Jeff Sessions to be impeached, arrested or hung from a yard arm. She also wants Trump impeached, and probably me as well. She probably wants you impeached, too, if you don’t subscribe to whatever school of insanity from which she preaches. I surfed the news, watching the “story” unfold.  I ask myself, is this a real story? Is it real news?  It sure smelled like fake news cooking in a cauldron of phony outrage.  At best, it was more hyperbole.

Man, it’s so hard to tell anymore what’s real any more. In a world of “click-bait” headlines designed to make you read some nonsensical story, every headline has to be more outrageous than the next. Half the headlines, maybe more, have absolutely nothing to do with the actual story.  Most headline, have nothing to do with facts, or they have no facts in the story. Worse than that, most people don’t read the past the darn headline!

So this leaves us with Jeff Sessions. Did he lie during his “job interview?” Is he an arch-criminal? Is this outrageous? Why aren’t I angry? Why could I care less? I guess it’s because the left is so hysterical about everything these days, I can no longer wade through the BS.

Hypochondriacs are bad enough. But, I have no patience for political hypochondriacs. Not every misstep or political disagreement is an outrage, nor will it kill the republic.  Not everyone needs to be impeached, step down, or tarred and feathered.

Do I want to know what happened with Mr. Sessions and his purported nefarious Russian contacts? Of course. But with this attitude of grabbing on to ANY story that makes the administration look bad, for the sole purpose of making the administration look bad, has watered down the headline. The credibility of news icon CNN and their ilk is gone. I won’t scream “Fake News” like the president, but I will turn off the TV and get my fiction, false facts, and phony outrage from the fiction section.  Political hypochondriacs aren’t dying … but they are killing this country.

David M. Salkin is the author of thirteen thrillers, with such publishers as Penguin, Post Hill Press and Permuted Press. He’s the Deputy Mayor of Freehold Township, NJ, where he’s lived his entire life. With 23 years on the governing body, Salkin has served on numerous boards and commissions. Salkin is a member of the Veteran’s Community Alliance, an associate member of the Marine Corps League – Philip A Reynolds Detachment, and continually works to help veterans.