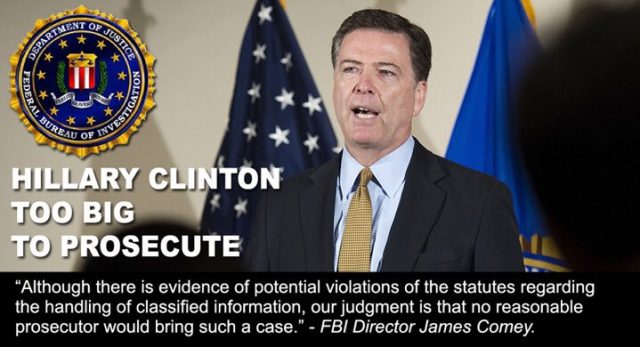 The rule of law is of no effect when the rulers may ignore the law.

Recently, Obama surrogates extolled his purported pristine ethical record, bragging that unlike virtually every other administration, no court has convicted anyone who worked for him.  That is remarkable; and it would be even more so if we were part of a country that applied our laws equally to both the politically powerful and the powerless.  Make no mistake; the law has always favored the rich, powerful, and connected.

A system born of and implemented by humanity is not without flaws and prejudices.  It is one thing to see elites favored in our legal system, it is quite another to see them exempt from it.  Any reasonable prosecutor understands that fact.

Today, events forced the FBI to re-examine the Clinton e-mail scandal because of new evidence.  The FBI apparently found evidence related to her case on the private devices of Huma Abedin’s estranged husband, disgraced former Congressman Anthony Weiner, according to news reports. Coupled with explosive revelations from the Wikileaks production of the Podesta e-mails, it appears FBI investigators are back on the Clinton case.  Do we now have a chance to hit reset on the rule of law?

FBI Director James Comey and Attorney General Loretta Lynch have failed America. I had grave concerns about Mrs. Lynch’s ability to apply the law without regard to politics, and I even suggested that she had disqualified herself through her conduct and admissions during her appointment hearings.

Comey and Lynch are a part of the emerging breed of American lawyers who put politics ahead of the law.  Lawyers have no business as masters of the public trust when their fidelity is to politics rather than the rule of law.

Government cannot apply laws differently to Americans.  That is the definition of tyranny.  Comey and Lynch had unique obligations to ensure government did not treat people disparately under the law, even if those people were politically powerful.  Mrs. Lynch had no business meeting former President Clinton on the back of a plane to discuss the ongoing legal investigation into Hillary Clinton.  Director Comey had no business letting Mrs. Clinton off the hook for clear violations of the law.

I watched the Comey press conference and listened as he methodically laid out the facts demonstrating Mrs. Clinton’s intentional mishandling of classified materials.  He demonstrated that she directed efforts to move those e-mails to a private server, and then worked to delete, destroy, and hide her activities.  With the deftness of a competent lawyer, Comey laid bare the damning facts.

I waited for his certain recommendation of indictment.

The legal case against Mrs. Clinton was elementary.  Here is the pertinent part of just one criminal statute that applies to Mrs. Clinton’s conduct.

“Whoever, being entrusted with or having lawful possession or control of any document … relating to the national defense, (1) through gross negligence permits the same to be removed from its proper place of custody … Shall be fined under this title or imprisoned not more than ten years, or both.”  18 USC 793(f)

Mrs. Clinton removed classified information from its proper place of custody.  She did so without permission, and she did so deliberately to control government documents. Mr. Comey suggested that because he found no other instance where a person engaged in this conduct and was prosecuted for it she shouldn’t be either.  That’s an absurdity. Either her conduct violates the statute or it does not.

Since that day, the facts have gotten worse for Mrs. Clinton, Mr. Comey and the rule of law.  We learned the investigation was botched.  The FBI destroyed evidence, and it inexplicably gave multiple co-conspirators immunity, merely for turning over evidence.  It was reported that honest investigators of the FBI fought for and expected an indictment.  Finally, we learned through the Podesta e-mails that Mr. Obama was purportedly using an alias to correspond with Mrs. Clinton on her illegal server, at a time when he claimed he did not know of its existence.

Today, the FBI took a positive step when it decided to look at new evidence as it relates to the investigation.  More needs to be done to restore the public trust in our rule of law.  Mr. Comey and Ms. Lynch should resign, and Congress should appoint a special prosecutor to investigate Mr. Obama.  Oh … and any reasonable prosecutor … applying the law to the facts … should indict Mrs. Clinton.

The legitimacy of government is not in the exercise of its police powers against its powerless and weak, but in the equal application of its legal authority against those who serve at its highest levels.  Such is a government where people serve, rather than rule.

** This piece was written the evening of the Comey Press conference.  It is included on this site for its analysis of the applicable statute covering Mrs. Clinton’s mishandling of classified material on her personal server.