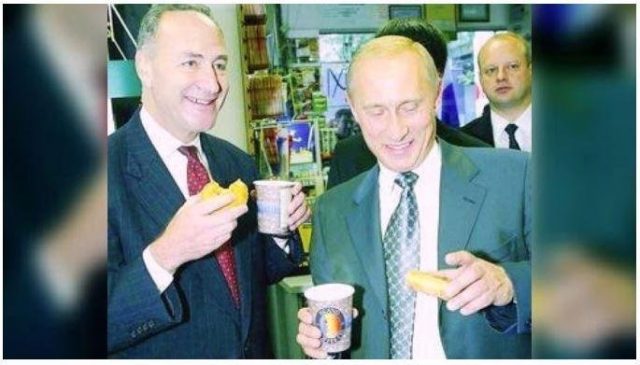 WASHINGTON – In a stunning new development, it was learned today that Russian ambassador Sergey Kislyak attended President Trump’s speech to Congress last Tuesday night – and that he sat with the Democrats.

When the news broke, every Democrat in both houses of Congress immediately announced his or her resignation.

Yesterday, many of those Democrats called on Attorney General Jeff Sessions to resign when it was learned that last year, when he was a senior member of the Senate Foreign Relations Committee, he met twice with the Russian ambassador.

“In view of my call for Mr. Sessions to resign, I felt that it was only fair that I hold myself to the same standard,” said former House Minority Leader Nancy Pelosi (D-CA).  “I’m nothing if not intellectually honest and consistent.”

Echoing those sentiments, former Senate Minority Leader Charles Schumer (D-NY) said, “I was reminded today that in 2003 I was photographed having coffee and donuts with the Russian ambassador. I’m obviously no more fit to remain in office than Jeff Sessions.”

President Trump called for the Democrats to withdraw their en masse resignations and their demands for Sessions to resign.

“This whole thing has gotten way out of hand. Obviously members of Congress occasionally meet with the ambassadors of countries from around the world, including Russia, in the course of performing their duties.  There’s no reason for anyone to resign, and this whole thing is just silly,” said Trump at a hastily-called press conference.

Former Sen. Claire McCaskill (D-MO) rejected Trump’s overture. “Yesterday i called on Jeff Sessions to resign and stated that I personally had never met the Russian ambassador. Since then, my own former tweets have been displayed showing that I had, in fact, spoken with him in 2015 by phone and met with him in person in 2013. Fairness dictates that I must hold myself to the same standard I set for Mr. Sessions. My meetings with the Russian ambassador and attempt to lie about it render me unfit to remain in office.”

Special elections to fill the Democrats’ now-vacant seats will be scheduled in the near future. Democratic National Committee Chairman Tom Perez announced that anyone who has ever met with a foreign diplomat will be disqualified from seeking his party’s nomination. Deputy Chairman Keith Ellison, a former congressman from Minnesota who joined his colleagues in resigning, added that the party will be focusing on recruiting Jewish candidates.

House Speaker Paul Ryan (R-WI) and Senate Majority Leader Mitch McConnell (R-KY) released a joint statement praising the Democrats for their show of “honor and integrity” and announcing that “in fairness” the Republicans will not field candidates to compete in the elections to fill the Democrats’ vacant seats. “If we were to contest those seats, we would be criticized by the news media,” explained McConnell.