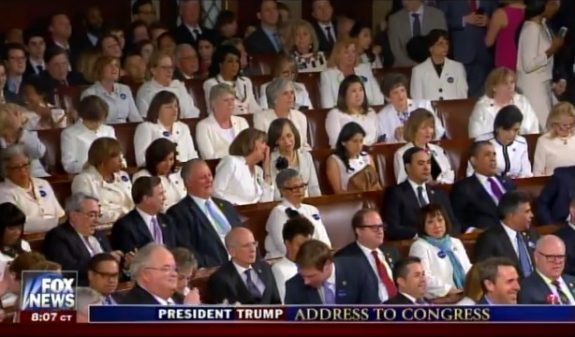 President Trump stunned most observers last night with his “Presidential” performance. From stalwart conservatives to #altleft radicals like Van Jones, commentators of every stripe agreed, Donald Trump turned a corner.  Last night, Mr. Trump became President Trump in the eyes of many.  That’s not to say that the left or the media will embrace him or give up the #resistance.  They will not.  However, Mr. Trump received a well-written, optimistic, conservative speech … with a hint of responsible nationalism … and he delivered like a President should.  I have been a frequent critic of Mr. Trump on tone and language, and I found myself tweeting out, “Finally, a speech from an American President.”   It was a performance you had to respect, with many lines for which nearly everyone had to clap. Unfortunately, Democrats would not clap.

If you are a regular democrat, a liberal or a progressive, I understand that many policy initiatives outlined by Mr. Trump represent ideas with which you don’t agree.  You are not required to clap for anything.  And, no one thinks you must clap for programs you don’t support.  Last night, however, what we saw was staged political theater where elected Democrats didn’t clap either because they really don’t like America, or they just weren’t going to clap for anything Trump said.  Let’s hope it is the latter rather than the former.

This isn’t a 2017 phenomenon.  The Republicans have done the same in the past to some degree.  Last night, however, the Democrats seemed to lower the bar … looking so small and petty.  They turned their #resistance movement into an anti-American grudge.  With Trump seizing on optimism, and mostly delivering a surprisingly upbeat message, with a shocking degree of competence, the Democratic pettiness jumped off the screen.

The juxtaposition of Democratic anger and sitting on their hands with a President praising his country in broad and agreeable terms is an image that will not help the Democratic Party.  That Party has sold to its angriest, most disenchanted, least responsible members, a narrative that Trump is illegitimate, his voters are racists or rubes, and it is just a matter of time before he is impeached.  Impeachment, many leftists think is certain and sure to happen in the near term.  Trump exploded that myth last night, and he sank the resistance, even if they don’t know it yet.

I have sat through the speeches of seven Presidents now.  These are staged events, and as I grow older I see the staging with more skepticism.  That’s healthy.  Cynicism is not healthy.  I have cheered and clapped, and even lauded certain speeches and lines by democrats.  I have to, I’m an American … and a President’s pride and promise to his country is worthy of my support, even when his general policies are not.

Likewise, when a President misleads, uses rhetoric with which I disagree, or pushes policies I don’t like, even with soaring prose, I am critical.  But I have never sat on my hands and rejected a US President and his pride, love for our country, and the general themes of American exceptionalism.

I have no idea how anyone does that.  Moreover, I can’t imagine why elected Democrats would not clap for pride of their own country.  This is the dangerous partisanship that has infected our society.  It divides us, and it will not serve this country or the Democratic Party well.

I have particularly chastised this President when he has gone dark.  I called his nomination speech, “A Thousand Points of Darkness”

I like @RichKelsey's take: "this is the "thousand points of darkness" speech"@WorldOfStu

I am by no measure, a Trump sycophant.   And while I opposed Mr. Obama more often, I was not a knee-jerk anti-Obamanite on every word he uttered.  I praised his speeches often, and even his actions with which I agreed.  It seems like that is the bare minimum we should expect from ourselves.  Moreover, we should expect more from our elected officials.  If they can’t love and respect our common culture and country, how can they expect to set an example that will unite us?

Democrats must clap … when clapping is right for America.