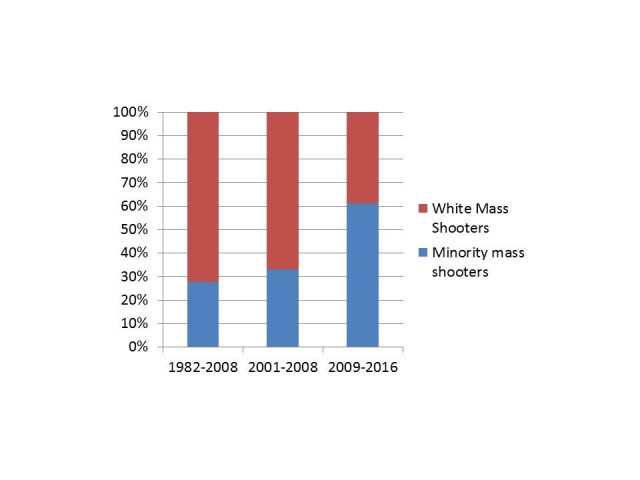 Statistics do not and cannot lie.  People can lie about them, and people can use them to distort an opinion.  Numbers are of no effect until put to use by people, like guns.  People use and misuse statistics on guns and crime every day.  Several years ago, the publication Mother Jones began working on compiling and writing about “Mass Shootings.”

To its credit, Mother Jones links its statistical information as a download to its articles. Former President Obama and liberal surrogates constantly told us that we were at a 30 year low on crime in this country.  That made me wonder why this country seemed so violent.  We know we have had a rise in mass shootings over those 30 years.  Did we know, however, about the rise in mass shooting by minority mass shooters?

This past year we had a rise in shootings of police officers.  We show a rise in murders the past two years, and the murder rate may be lower overall nationally, but it has risen at its fastest rate since the 1970s.  In our major cities, violent crime is spiraling. 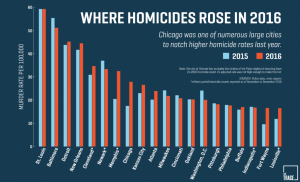 In Obama’s adopted hometown of Chicago, there is a war on civilization.

Murders skyrocketed.  The murders in Chicago make up for more than half of the estimated 13.5% rise this past year in the U.S murder rate.  The year 2016 saw innumerable riots.  It ended and 2017 began with the horrific, racially motivated torture of a white, disabled man by four young Chicago miscreants.

Just as the Obama administration once claimed unemployment in such a discontented land was only 4.7%, something also doesn’t seem to match its narrative that the U.S. is safer now than it has been in decades.  Then, the New Year rang in with another new mass shooting at Fort Lauderdale Airport by a purported convert to radical Islam.

As early as June of 2016, I began to examine the data on mass shootings when a former law student of mine wrote a post blaming most mass shootings on white males.  That is a deceptive and useless way to read the data.  However, in the search for trends, a surprising and troubling truth emerged. Here is what I found in the data, which covers 1982 to present.  (Again, this is not my data, but the data of liberal Mother Jones publication) 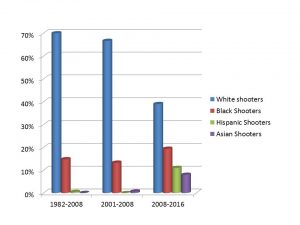 Overall, the total minority percentage of mass shooters from 1982 through 2008 was 26.6%, in line with the population.

In the 27 years including 1982 through 2008, we saw an average of 1.74 mass shootings per year, with an average death toll of 8 people per occurrence.  While the data do not record religion, it appears that none of the mass shootings in the first 27 years was attributable to Muslims practicing Islam.  The total Muslim population in the US in that period was well under 1%.

What happened to these mass shooting numbers after January of 2009?

From 2009 forward until the close of 2016, there were 36 mass shootings.  In those 8 years we averaged 4.5 shootings per year.  That is an increase of mass shootings of nearly 158% per year.  White males, a population now of 31-32%, accounted for 39% of the mass shootings. That is a percentage decrease of over 44% from the prior period where white male shooters disproportionately dominated the ranks of these mass killers.

With the large increase in mass shootings, who is doing much of the shooting since the beginning of 2009?

Put statistically, mass shooters since 2009 compared to their race are: 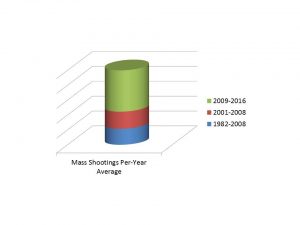 Put more starkly, the 7% black male population has engaged in mass shootings at a rate of 277% greater than its US population, or 2.75 times its population.

In fact, white males, once the primary offenders in these shootings at 70% of the total shootings are now in the minority.  Mass shootings since 2009 are 61% the work of minorities, according to the data collected by Mother Jones.

Do you find these statistics alarming?  Consider this; these numbers do not include the last two mass shootings, one of which was in 2016.  Acran Cetin, the Cascades Mall shooter in Washington State was a naturalized citizen who immigrated here as a child.  Mother Jones does not list his race.  At the time of this writing, the shooting in Florida was purportedly by a man named Estaban Santiago, whose race likewise cannot yet be verified.

In 2017, as the Obama Presidency closes, we are well on our way to a year of more mass shootings.

Lest critics think I have sliced the data unfairly, I sliced it again.  Rather than just pulling out the “Obama” presidency, I pulled out the Bush presidency to see if the numbers were changing gradually. I was surprised to find nearly no measurable change of significance.

In the Bush years of 2001-2008, the numbers nearly mirror the entire 1982-2008 period.  That is, 66.67% of the mass shootings were by white males.  There was only one female. The overall rate of shootings increased from 1.74 per year to 1.875 per year.  The minority shooters included two blacks, no Hispanics, an Asian and a Native American Indian.  Those minority numbers are nearly perfectly in tune with the population percentages of the respective groups, accept that Hispanics were not represented at all.

Everything seems to have changed in January 2009.

I can’t answer definitively why this remarkable statistical shift has taken place.  Correlation does not equal causation.  Some will say that I am trying to blame people of color, who they will say are disproportionately victims of a racist society.  Some will say foolishly that it is the guns themselves.  Some will say nearly anything out of anger or ignorance.  I don’t say anything other than that the numbers tell a story.

Something has happened in this country and it happened quickly.  We have to be brave enough to investigate the stark changes in criminal behavior without hiding from the facts.  It is 100% true that overall our crime rate has dropped over the last 40 years.

Yes, in neighborhoods where many of us choose to live, life is safer than it has been in decades against violent crime generally.  Still, indiscriminate killings in the form of mass shootings are up, and those involved in them have changed dramatically.  We ought to find out why.  In addition, the violence in pockets of this country has increased, not decreased.  Chicago is just one example.

A full frontal assault on police has gone mainstream.  Black athletes sit during the national anthem in solidarity with the Black Lives Matter movement and the radical New Black Panther Party.  Assassins now target and kill our police.  In a full-on riot in Charlotte, 12 police officers were injured in one night in what the media euphemistically called a “protest.”  We are seeing both the breakdown of the civil society and the radicalization of segments of American society.

It is, in my opinion, unmistakable that the tone set by former President Obama toward police was more hostile than any president in history.  He coddled radical leaders, used race-hustlers like Al Sharpton as emissaries, and promoted the idea that enforcing the law against people of color is motivated by racism.

The country is a tinderbox of racial grudges.  Riots break out even when black police shoot or apprehend armed felons engaged in felonious activity.  The answers to this remarkable problem are more complex than pinning it on one man.  One man, however, who controlled and recklessly misused the world’s greatest bully pulpit clearly had some effect. When he encouraged people to bully police and Americans to divide themselves along racial lines, he sparked animus and anger. That has been the Obama syndrome.

Is Mr. Obama to blame for all this?  I reiterate my opinion I used to describe the Dallas police shootings.

Likewise, we should embrace the civil society, and show respect for the rule of law and our fellow man, of any color or creed.  While we do that, we should investigate, without political correctness, what has caused the dynamic shift in this country’s mass violence.

NOTE: The piece was written in July of 2016, then updated 5 times before its ultimate February 2017 publication. The line, “the country is a tinderbox of racial grudges” was in the first draft.  Little have I ever written has been more true and prescient than that line.

That Time Obama Had Secret Contact With the Russians Before an...