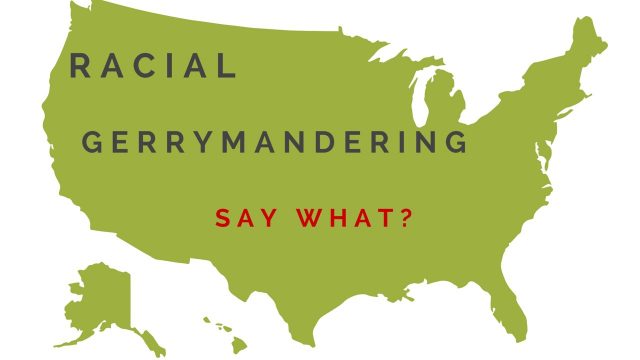 The federal government needs to get out of the business of promoting race-based voting districts.  The Voting Rights Act of 1965 has been repeatedly amended and often tested in the Supreme Court.  It keeps evolving as a statute, and with it the body of Supreme Court law.  Yet, it continues to face legal challenges.  The reason for this is simple, the outline and structure of the law promotes dividing by race.  As such, the Courts and the Department of Justice moved the country toward creating majority “minority” voting districts.  Historical wrongs and remedial intentions drove Congress and the Court to do the one thing this country needed least, which was to encourage politicians to promote racial gerrymandering … or racialmandering.

Originally, racial gerrymandering focused on the practice of diluting minority votes and spreading out minority voters such that they likely would not have many opportunities to vote for minority candidates or be represented by elected minority representative.  The practice was a purposeful effort to dilute minorities.

To combat it, the idea sprang forward that minorities should have their own district and that they can only be properly represented by minorities. This is paternalistic view that minorities need and can only be served by fellow minorities is itself a troubling concept not rigorously subject to challenge in our policy and political debates.  However, putting aside the subtle racism of paternalism, the Voting Rights Act was drafted to combat real racism and real disenfranchisement.

The solutions may not have been perfect, but one might argue they were necessary.  It is not 1965 anymore.  Majority minority districts mostly exist now as a function of choice, rather than anti-minority, race-based, gerrymandering.  As a result, democratic writers, thinkers, party officials, and activists have come to the realization that majority minority voting districts may actually be hurting the Democratic Party by packing too many of what party activists believe are reliable democratic votes into these districts.

Since these activists can’t change how and where minority communities live, they now want to unpack these majority-minority districts by attacking all efforts to serve majority minority districts, remedial or benign, as racist. In short, they want reliably majority-minority-districts, but they also want minorities reliably spread into other districts … not merely to help minorities, but to help democrats.  Ironically, this movement isn’t based on “race” … it is based on the racist assumption that democrats may reliably bank black votes.

So, the latest challenges to the voting districts are no longer about creating majority-minority districts, a practice that ultimately mandates racial gerrymandering.  These challenges are the flip-side of the racial gerrymandering coin.  These new suits allege that majority-minority districts are being improperly packed with minority voters in order to protect surrounding voting districts and insulate them from the power and predictability of minority voting.

Troubling as it may be that minority voting is so predictable that movement of minorities accurately predicts voting outcomes, that circumstance is the reality.  Now, Democrats want those majority-minority districts to stay in place, but with as few minorities as necessary to hold democratic seats.  They want enough minorities in districts to hold them, and more minorities in other districts in order to make those districts competitive.

When you count by race, you divide by race.

In Virginia, for example, the legislature after the 2010 census redistricted the House of Delegates.  The plan was bipartisan.  That plan resulted in multiple elections based on those districts as drawn.  Then, a group of plaintiffs challenged the 12 majority minority districts in the plan, alleging that the Virginia Assembly used race as a predominate factor in creating majority minority districts.  This, you cannot make up.

In an effort to comply with the Voting Rights Act at the time the redistricting was done, the Virginia assembly looked at these majority-minority districts.  In so doing, it recognized that these districts had a range of minorities in them from 46% to nearly 70%.  It chose a target of 55% of a black voting age population for the districts to both meet the traditional districting criteria, and to satisfy the mandate of majority minority districts.

This got the legislature sued.  I actually agree with the idea behind the suit.  That is, I have no interest in helping democrats or pushing the “racism” narrative, but a real conservative must be true to Constitutional principles.  Race should play no role .. ZERO … in creating voting districts.

The allegation of racial gerrymandering is both an effort to force the map to be redrawn and to grab an issue that always helps democrats, which is the allegation of race-based, nefarious, voter-dilution or suppression.  Following the law, and acting in bipartisanship are not open acts of racism.  Still, this entire episode exists for one reason and one reason alone.

We continue to use race improperly as a preference in nearly everything.

Removing that reality would change these districts. Ironically, that is the one argument that democrats nationwide don’t want to make.  It is time, indeed, past time, for the Supreme Court to strike down any law that permits, encourages, or requires race as a consideration in drawing voting districts, or for another purpose.   Racial preferences have no place in drawing voting districts any more than racial animus has a place in that endeavor.  Of course, fighting against racial preferences as a whole undermines popular political democratic positions.  Instead, those who push race in redistricting find themselves arguing that majority-minority districts are still good, but not with too many minorities.  How odd.

The posture of the Supreme Court case arising from Virginia does not lend itself to the Court striking down the use of race as a factor in redrawing districts, though that might still happen.  With eight justices, including Justice Kennedy’s sympathetic ear, it is quite possible that Virginia will lose the appeal brought by the plaintiffs.  If so, the case is likely to be remanded back to the three judge panel for a new hearing on a clarified standard of the application of racial predominance.  If that happens, the case could still appear back before the Supreme Court in two years.  If it does, it may be that Virginia challenges “race” as any factor in drawing districts.

The Supreme Court at that time will, hopefully, be prepared to strike down a law that asks American politicians to improperly consider, and therefore be subject to manipulating districts based on race.  That would be a great outcome, and the first step in eradicating our insistence that race be used for good or evil.

Gerrymandering is bad enough, but a federal government that requires racialmandering has lost its Constitutional mooring and moral authority.