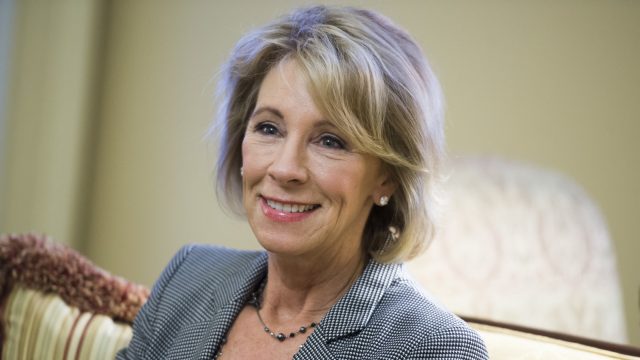 Over the past month, the National “Education” Association and its state and local affiliates went to the mat to defeat President Trump’s nominee to be Secretary of Education, Betsy DeVos, from being confirmed.

And accordingly, our kids won.

The National “Education” Association is a misnomer.  The NEA is the single greatest impediment to quality education in the country.  It uses its power to enforce the status quo, leaving millions of kids trapped in failing schools, and it opposes every good proposal to improve our education system and give those kids a chance at success in their lives.

No, the NEA is not an “education” association at all.  It is a teachers union whose policy objectives are targeted at making it as hard as possible to hold teachers accountable for their results.  Because of the NEA, it is almost impossible to terminate incompetent teachers, and it is extremely difficult even to determine the quality of their work.  The NEA puts up obstacles to accountability at every turn.

The NEA is one of the most powerful and influential members of the Democrat Party coalition, with nearly 20% of delegates to Democrat National Conventions routinely being NEA members.  But the NEA has also bought two Republican senators, Susan Collins of Maine and Lisa Murkowski of Alaska, both of whom opposed DeVos, and both of whom coincidentally enjoy high rankings on NEA “report cards” and receive tens of thousands of dollars in contributions from the NEA and its affiliates.

Betsy DeVos is independently wealthy, and she has used her time and wealth to fight for education reforms such as charter schools and a voucher system that enables all parents – not just elite Democrats who can afford private schools – to choose which school their kids will attend.  The NEA, of course, vehemently opposes these reforms because they would serve to reduce the unions’ power and control over our kids’ education.

During his campaign, Donald Trump went into the inner cities and promised to fight to revitalize them, starting with providing kids in those areas with a quality education.  The nomination and confirmation of Betsy DeVos to serve as Secretary of Education is a stellar down payment on that promise.

We can now look forward to federal resources being used not to further entrench union control of our schools, but to shift that power to parents who are desperate to give their kids better opportunities for success than they ever had under the status quo created by the teachers unions.

Any day the teachers unions lose is a good day for our kids. Today is a landmark day in the liberation of our kids from their union-imposed captivity in failing schools.