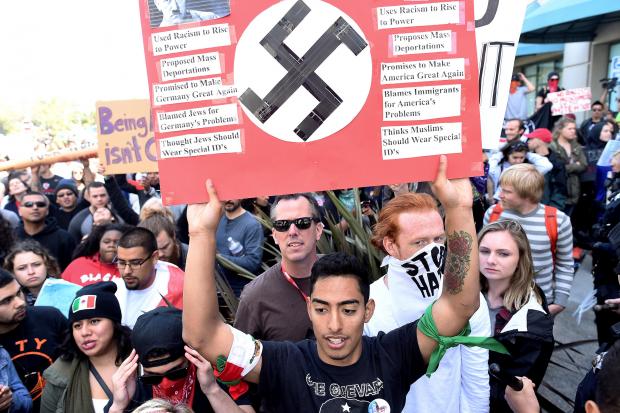 The Democrats have become unhinged, but it doesn’t matter.  They are irrelevant and rendering themselves more so every day.

We all see how insane they’ve become.  Whether it’s blocking traffic on interstate highways, trashing buildings and burning cars, wearing vagina costumes while spouting sanctimony about human dignity, or boycotting Senate committee meetings in an obviously futile effort to delay the confirmation of good cabinet appointees, the Democrats at every turn are showing that they have lost any semblance of rationality and have lost their minds.

Included in this assessment are the Democrats’ loyal lapdog “news” media.  CNN is pushing out fake news by the hour on everything from a “Muslim ban” that neither targets Muslims nor bans entry into the country to contrived “polls” showing President Trump with an approval rating 20 points below what other polls show.  The New York Times screams that the nomination of Neil Gorsuch to the Supreme Court constitutes the theft of a seat that rightfully belongs to Barack Obama, who is no longer president and whose party was voted out of power in the last election.  And we all saw the wall-to-wall coverage of the so-called “Women’s March,” but what is this “March for Life” of which you speak?  It’s all enough to make decent people fear for our country.

Yes, the Democrats are making asses out of themselves by acting out as lunatics, and yes, their lapdog “news” media breathlessly report on those actions as if they represent the mainstream of America while those who are actually governing are somehow on the fringe.  But the fact remains that our side is, in fact, governing, while the Democrats are rendering themselves more and more irrelevant.

Republican Richard Nixon ran for president during the turbulent ’60s, when the left also was acting like a bunch of petulant juveniles with inner-city riots, violent anti-war demonstrations, free sex, and loose drugs.  Nixon nevertheless ran as a conservative, expressing confidence that he would win based on the “silent majority” of people who were sitting at home watching all of this clownery in disgust.  His election in 1968 by a majority of people, none of whom were personal acquaintances of the “news” media reporting on the election, proved him right.

Nixon’s silent majority still exists.  The vast majority of Americans get up every day and go to work, go to church, synagogue, or mosque on their holy days, raise their children to conduct themselves with civility, decency, and honor, pay their bills, give to charity, support their communities, and live their daily lives in a dignified and respectful manner.  These people have neither the time nor the inclination to riot, demonstrate, or otherwise act out in support of their political views.  They choose instead to promote their political views through the one most powerful means:  the ballot box.  And that’s precisely why Donald Trump was elected president – and why no one in the “news” media reporting on the election personally knows anyone who voted for him.

So when you see Chuck Schumer crying over an immigration policy for which he publicly advocated two years ago, or when you see abortion advocate Nancy Pelosi claim that Republicans are defying God with our conservative policies, or when you see Hollywood actors and other leftist radicals compare our president with the Nazis who murdered six million of my people, or when you see the star of the family television show “Supergirl” brag about her “vagina made of steel,” or when you see our previous president defy two centuries of tradition and openly criticize the current president, or when you see leftist (unemployed) protesters recruited and paid by George Soros rioting in the streets, or when you see a Democrat acting attorney general traitorously attempt to turn the entire Justice Department against our president, just relax:  These people have no power.

To paraphrase some old writer known to be almost as eloquent as your humble author, these lunatics are full of sound and fury, signifying nothing.

We are the ones who have the power to govern, and we are using it to restore our country.  The Democrats can’t stop us, and they know it, which is why their collective heads are exploding.  And when they act out like maniacs, the silent majority of American people watch, thank God that the Democrats lost, and support us all the more.

So let not your heart be troubled.  Sit back, grab a brandy and a cigar, and enjoy the show.