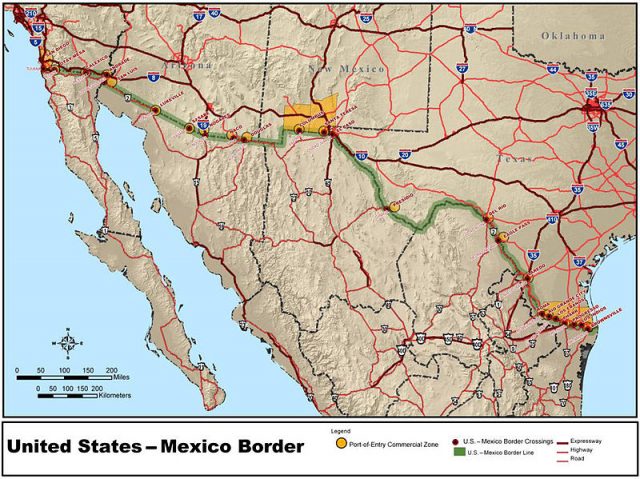 The Trump administration took immediate action to build the “Wall” between the U.S and Mexico on which President Trump campaigned.  I was neither a proponent nor an opponent of the Wall.  I don’t think it is the best, most effective tool for removing incentives for illegal aliens to come to America.  It is an obstacle, but with the existing incentives, it will only slow illegal immigrants, not stop them.  Still, the Wall is a significant political statement, and building it will be the first time since the immigration wave began that any administration from either party sought to truly combat illegal immigration.

If we are going to build this Wall as one step in this illegal immigration struggle, Americans ought not to be forced to pay for it.  While Mr. Trump has promised that Mexico will pay for the Wall, in reality, his plan involves retaliatory tariffs to fund construction.  This is a tax on Americans.  Tariffs are paid, after all, not by countries, but by consumers.  They are a tax on goods that Americans, not the Mexican government will pay.  Illegal immigration is already a tax on our society.  Paying for our security might make sense, but there is a better solution.  Let’s make illegal aliens and their supporters pay for our Wall.

Mexico’s top three sources of income are oil exports, tourism, and remittances from the United States.  Remittances are money sent back to Mexico from the America, usually by some form of wire.  In 2015 remittances to Mexico from the United States totaled just under 25 billion dollars.  In fact, in some years, remittances exceeded tourism dollars for Mexico.  If you want to know why Mexico doesn’t want to help America with its illegal immigration problem, recognize that Mexico exports its poorest and least skilled citizens, and in return receives 25 billion dollars.  No … Mexico is never going to pay for the wall or cooperate to stop illegal immigration.

The Trump administration, however, should tax remittances to countries on our continent.  A 10% levy would yield 2.5 billion a year just from money transferred to Mexico.  As economists know, taxation is not a straight line equation.  Put more simply, taxation causes tax avoidance, which means that the size of the tax must be big enough to be worth enforcement and collection, but not so large that it significantly changes conduct and methods.  A 6-10% federal tax on remittances would fit that bill, particularly since the mechanisms for sending money back are few and alternative means are expensive and risky.

This tax would effectively force those here illegally, as well as those sending productive-use dollars out of the country, to fund the Wall.  Open borders advocates will howl, and progressives will allege that the tax is everything from racist to regressive.  The open borders lobby is already in fall warrior-mode, and they have no intention of helping with a constructive set of enforcement policies.  In fact, they are part of the reason we have this problem, and their complaints about such a tax will be no more meritorious than their reasoning that foreign nationals should have free access to enter our country without regard for our laws.

Building the Wall is the most positive step I have seen since I joined the fight to stop illegal immigration in 1991.  That’s why I am getting behind it.  It is not a fix to the problem, and it cannot be the only action we take. But it is critically symbolic.   Our ultimate goal in combating illegal immigration should be to remove incentives to come here illegally.  Those incentives include free k-12 education, in-state US college tuitions, and sanctuary cities that harbor , encourage and subsidize illegal aliens.  Of course, the real incentive that would end this national nightmare would be to end birthright citizenship for children born of two foreign nationals.  That sensible solution is far more difficult to obtain.

So, for now, Mr. Trump has audaciously fulfilled a campaign promise.  He has reversed four decades of US open borders policy.  That’s great.  He wants Mexico to pay for this … which I wholeheartedly endorse.  However, rather than a policy that taxes American citizens and slows business, let’s tax those remittances and force people sending money out of our country to build this Wall.

Hero or Victim? It is a Time of Choosing for...