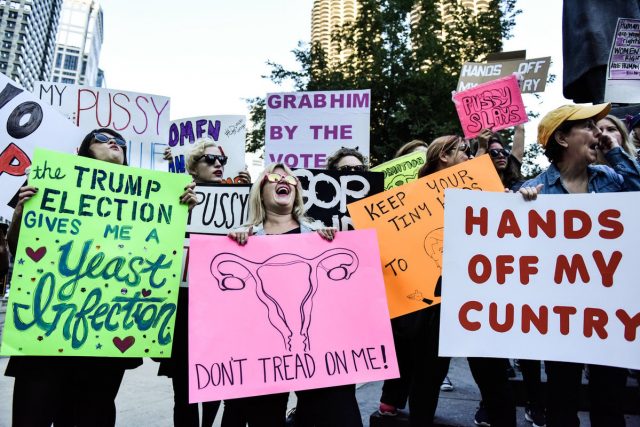 Identity politics started as a way for political consultants to segment voters.  It grew into a cottage industry where the left works to cobble together what is best described as a tyranny of the minorities.  The de-Americanization of America has been an effort to make us red v. blue, man v. woman, white v. minority, gay v. straight, etc.  Instead of “Americans,” politicos parse us into groups to gain political power.  The central target of the left’s political coalition building has always been women.  There are a lot of them.  Prior women’s movements have sought properly to elevate women in the eyes of the country and world.   Those movements were founded on the concept of equal rights.  Later, these movements were hijacked by the left and more recently they have been converted into efforts that pervert both woman and motherhood.  In nearly 50 years, the women’s movement has moved from equality to contraception, from free to love to free love, from giver of life to abortion.  Now, the movement is about free contraception, vulgarity and subsidized sexual anarchy.  The left has reduced our magnificent women to their vaginas as part of some odd vagina syndrome.  Women are so much more, and they deserve so much better.

The Women’s March last weekend was a perfectly executed political event where alt-left money and radical political operatives connected to a losing political candidate united millions of women purportedly in sisterhood.  They used these women, frankly.  For more than ninety percent of those women, they were there to stand against Mr. Trump’s boorish behavior and bond as common sisters against a mean, misogynistic world.  The other 10 percent of marchers were there to organize and protest against a free, fair, election.  That more radical group also wanted to use the majority of marchers to inflict upon the country a form of left-wing jingoism that reduces the fairer sex to a body part.  Some women actually wore vagina suits.  Some carried signs that would make Trump blush and would have earned them a good mouth-washing out with soap by real women of a different era. The crazies who embarrassed their gender and whose left-wing movement used the good will of so many other marchers won the day.  For the hard left, they essentially made this a march of “rubes for radicals.”  In the name of sisterhood, organizers created a huge turnout.  That turnout normalized a version of women that is so much smaller than the greatness of our American women.  They normalized vulgarity, indecency, anger, partisanship, and an anti-mother, anti-family message that elevated the vagina over womanhood.

That radical, alt-left view of the American woman does not square with a respectful, optimistic, and indeed adoring view of the American woman shared by real men … and real conservatives.  American women are not defined by their vagina, and they don’t wear vagina suits.  They are not victims.  They are not less than us, nor do they have fewer rights than us.  They are not worried about government regulation of their vaginas, a phrase born of idiocy and ignorance.  They don’t march behind, with, or in support of slogans like, “Hands off my Cuntry.”   They are strong, they are independent, and they are still loving, passionate, giving, care-providing people who see womanhood as a blessing and advantage … not a handicap.  The rubes marching for their radical sisters claim they want to make women equal with men.  That’s funny; why would they want the demotion?

My father was a World War II Marine.  He was a genuine American hero who helped raise seven kids, built a business, assumed leadership in his community, and ultimately passed away leaving a remarkable legacy … none of which would have been possible without the women in his life.  His hero was his mother, and his life partner is my mother … his wife of 59 years.  She made him the man, father, businessman, and leader that he was.  My mom is still alive, and at 85 she is smart as a whip and fit as a fiddle.  She wouldn’t march alongside that confused group of rubes, rabble, and radicals for all the money in the world.  Though, march them into the ground she could have.  Would my mother wear a vagina suit? No.   She’d have given those poor girls the ass-whooping someone left out of their lives.  Yes, I called them girls … not because I am misogynistic … but because women don’t behave that way.  Neither manhood nor womanhood is defined solely by age, but rather by conduct.

I am the seventh child of my mother, a 50 year-old white, conservative male.  I can tell you in my house, no one was more respected, loved, and admired than my mother.  She had 5 kids under 5 at one point, and one of them had profound disabilities.  She cared for all of us and endured difficulty of which pink-hatted, vagina-marchers never dreamed.  She raised the family, worked, and in every measure was the equal partner of and driving force behind my father.  She gave love in every way, and she made our lives bigger, better, and more full than they could ever have been had she been any less of a woman or mother.  Was she less equal than my father?  That would have been news to anyone in our family.

My mother is a real woman.  She didn’t spend her time lamenting how life, men, society, or the federal government let her down or oppressed her.  She is a fierce, strong, independent, woman who did things us mere men could never imagine.  Still today, as she has done every single day for two decades, she writes us all an email.  It’s about family, love, her cat, her Mets, and occasionally, a word on just how screwed up this country has become.  And, to be clear, she’s not talking about me, white males, republicans or even democrats.  She’s talking about the rubes, the radicals, the whiners, and the crybabies.  She is talking about the selfish, weak, amoral women who have reduced the glory of womanhood and motherhood to an anatomical part about which decent people don’t discuss in public.

I was never on the Trump train.  Neither he nor Mrs. Clinton were my pick in this election.  I promoted a guy the world now knows better, General Mattis.  Still, Trump’s slogan “Make America Great Again” appeals to me.  In fact, he was correct when he said, “when you open your heart to patriotism, there is no room for prejudice.”  We need to reject the false flag of identity politics and unite as Americans.  Likewise, if we have any chance of at making America great or greater, we will need to make American women great again.  That does not happen through vulgarity and diminishing their superior standing.  It will happen when we cure this vagina syndrome pushed by a radical segment of our society.