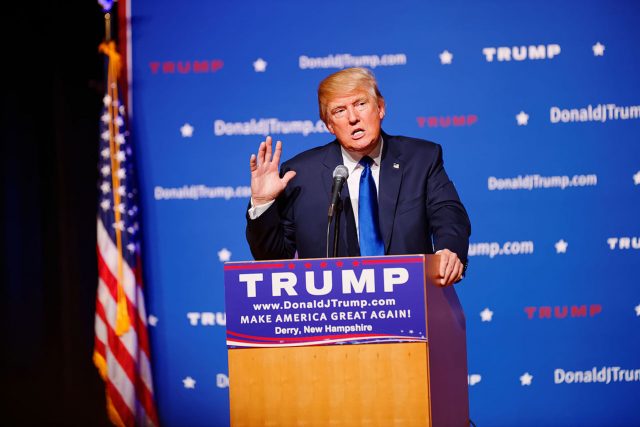 Donald Trump has the two most important ingredients needed by any political candidate in modern American politics.  He has money and name recognition.  Without those, the world is filled with lots of people whom might otherwise be President.  The real question is, however, what is driving Trump mania?

He’s at the top of the polls.  In fact, whatever Trump does seems to require all the other candidates to answer questions not about the issues, but about Trump himself.  Trump is driving the political train in America, and for one political party, they are certain it is off the cliff.  For the democrats, they just want more Trump.  Be careful what you wish for.

You know what a smart, successful, charismatic, fast-talking, super-famous man can do with 9 billion dollars … anything he wants.  But is the Trump phenomenon just about a big name, big bucks, and a big mouth?  Don’t bet on it. Trump didn’t become Trump because his daddy was rich.  Lots of kids of dads richer than Trump are not driving the national Presidential race.

Trump is dangerous for both political parties for two reasons.  He appeals to the masses because he says what they think, and he has what they want.  More importantly, he simply can’t be made to tow the line.  He can’t be controlled.  He won’t be shamed, embarrassed, quieted, spoken to, or threatened.  The political apparatus, its friends, its machinery, its minions – they can’t silence Trump.  He’s unplugged from the matrix.  Oh  – people like that.

To many, the Republican and Democratic parties have become so self-serving, so antithetical to the ideals on which America was founded – and so powerful in our purported democracy, that the parties are indistinguishable from each other.  They are seen as corrupt by many.  The parties are viewed as wholesalers and exporters of lies.  They produce candidates who say nothing, who stand for nothing, and whose first allegiance is to the party … rather than people.  They can crush you, save you, silence you.  They pick the winners and losers.  They do the buying and selling.  Democrats are seen as socialists who buy votes through shameless redistribution.  Republicans are viewed as accomplices who buy votes for monied interests while expanding federal power for their own little clique.  Many Americans see the parties as the flip sides of a devalued coin.  Heads they win, tails Americans lose.  Mr. Trump won’t flip that coin, he makes his own money, and the only thing he flips these two parties is the bird.

Polling suggests Americans are increasingly disgusted with the political process.  They feel they are powerless.  No one lobbies for them.  No one says what they think.  No one speaks like they speak at home, with their friends and neighbors.  Americans trust neither party, and they really don’t like any one establishment candidate.  Yes, they get caught up in the red versus blue strawman “fight” set up by the two parties, but at heart, they think all politicians are corrupt, in it for themselves, and no longer serving the people.  Americans wish they had a voice.  Many wish they didn’t have to stay quiet, eat crow, or have their rights, liberties, and labors rationed.  They would just love – for once – to stick to the man.

Trump … he knows how to stick to the man.  Well, Mr. Trump, aren’t you the man?  Sure he is, but in this role he is the man who sticks it to the man.  He’s a 9 billion dollar man of the people. Trump isn’t nuanced.  He sure isn’t reading from a teleprompter.  He’s like your crazy uncle, he might say anything, and you only hope you are there when he does.  Indeed, if he didn’t have 9 billion dollars, he might be once crazy carnival barker.

Here’s the thing about Trump too, he knows what fries peoples’ fajitas.  Americans know the immigration system is broken, and they know illegal immigration is an economic disaster wrought on this country by both parties.  Americans know China’s rulers are despotic, with economic trading practices that hurt America.  Americans know they pay too much in taxes, and that too few people are paying in.  Americans know that capitalism creates jobs and opportunities and government does not.  Americans likewise know that most politicians never built or created anything, other than the mess we are in. Trump tells them what they know, and he says it the way they think it.  If you agree with people, and fire them up while doing it, they are going to like you.  They sure like Mr. Trump.

Trump is like Ross Perot on steriods.  He’s more dangerous because of the charm.  Moreover, he doesn’t want to build a third party.  He doesn’t really want to be in your party either.  He is the party.  He’s the guy who is going to answer to no one.  In a country filled with people who can’t get answers from anyone … Americans want a guy to tell it like it is.  Mostly, they want someone who can’t be silenced.   I seriously doubt that Mr. Trump will be President, but I am certain he is and will be a determining factor in who will be the President.

The system, and both parties don’t like him, and that is why so many people do.