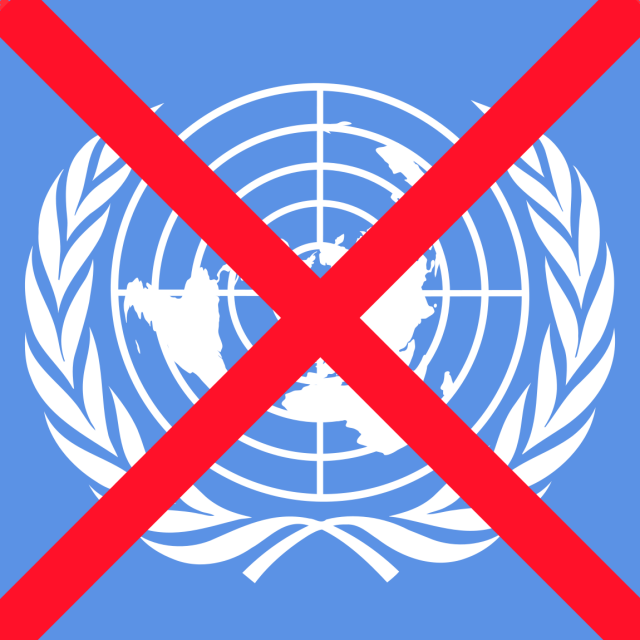 The United Nations has for my entire adult life been the whipping boy of populists and American firsters. Just the mere mention of the UN back in the 80’s could send many of my friends, family members, former military, working class, flag-waving Americans into a frenzy.  In fact, when Mr. Obama conspired with the UN to pass a resolution condemning our only democratic ally in the Middle East for lawfully building on its own land, it dawned on me that one element from this populist movement in our country was missing from the campaign.

How did Mr. Trump miss the chance to hoist the UN up for the flogging it so richly deserves?  In part, Mr. Obama steered clear of high profile UN actions, and as such, no natural issue gave rise to what seems like an easy target.  The UN is a coffee clatch whose members are primarily spies, liars, schemers, and playboys.  It has become a tyranny of the minorities.

The UN’s primary modern purpose is to attack American and Western values from double-parked limousines and glorious NYC office views.  The successor in interest to the League of Nations, and later the vehicle for Bush’s new world order, the UN is an old world order from which the United States should exit.

The UN never did anything to stop the Soviet Empire.  The UN has only given legitimacy to rogue nations like China.  It has allowed despots and fringe crackpots from Iran and a host of other nations to conspire with each other and to lead an agenda against the civilized world.  Its blue helmets on the ground often never kept the peace.  It cannot exist without our money, our military, or our adult supervision. It’s only useful purpose is our own means to spy on its scoundrels, a job we can accomplish now without its US-based presence.

The very purpose of the UN was to give responsible nations a model for civilized dispute resolution and the incentive to find common cause to attack problems we all face.  Acting collectively, it was once thought, gave legitimacy to the body.  Yet, to this day President Bush’s war in Iraq, based on the violations of UN resolutions, is considered by many in our country and around the world to have been both an unjust and illegal war.  Its resolutions carry no meaning. They lack the force of credibility and the sword of justice.

The recent Obama-inspired vote against Israel will not bring a two-state solution.  It will not stop Israel from building lawfully on the land set aside by the League of Nations for the Jewish State. That vote, however, may be the first shot in a war against faux globalism.  Nations worshipping the UN like a Pagan god often see it as a mechanism to impose murky, weak, and morally suspect cultural and legal decisions upon a world population whose greatest needs are liberty, clarity, and justice.   The UN specializes in none of those.

There is, of course, a counter-argument to leaving the UN.  It is a reality that if the US were to leave, some other wanna-be world actor will reconstitute a new UN style entity, on its shores, and for its nefarious purposes.  The new World of Nations or something catchy like that might open in Moscow, or Beijing, or in some other country where liberty is gasping for air and freedom is state-rationed.

The old world order that the UN represents is dead.  It has no vision.  It claims no moral conscience, and it is and has been a breeding ground for the forces allied against liberty.  Whether we force it to exit the US, or whether we inspire a revolution through our US exit, the time has never been more right, the cause never more clear, and success of liberty never more essential than now.

It is time for the United States of America to leave the UN.